The sub-title of Vince Houghton’s book, ‘Nuking The Moon’ is ‘And Other Intelligence Schemes And Military Plots Best Left On The Drawing Board’. That should point out that this isn’t some mad inventors dreaming up ideas, well, not all the time, but seeking a solution for a war-time problem, often with proper tests before some impracticality that hadn’t been realised stops it in its tracks.

You know the kind of thing. Cats are not good parachutists and foxes aren’t very good at island hopping, let alone not like wearing white paint to invade Japan. Having bats instead to carry small bombs in Japan almost got carried out except atomic bombs were chosen instead. Acoustic Kitty was even a project to wire cats for sound but didn’t take into account their wandering nature for eavesdropping. 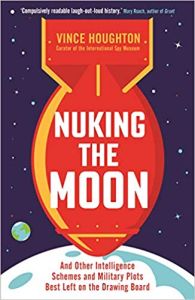 Plans to kill Hitler were ultimately abandoned when they realised because of his hands-on approach to war that he was the worse strategist and made more sense to keep him in place and do their work for them. The CIA’s various plans to remove or assassinate Fidel Castro were ever more various and cunning but rarely implemented.

Don’t think only failures are noted in this book. Some were very successful. Remember how the Russians bugged the American Embassy in Moscow when they presented them with the Great Seal with a passive eavesdropper. Oh and the various bugs in the walls and foundations made the Americans decide to bring their own building materials when they revised their embassy.

Then there is a look at how we British successfully misled the Germans in WW2 by recognising their mindset and played at their weaknesses is still classic. Houghton did point out some strategies were less effective against the Russians simply because we didn’t understand their mindset so well in the 1950s. Mind you, if we did, would we want it revealed today?

Project Habakkuk was an idea by British inventor Geoffrey Pyke which was taken seriously into building gigantic aircraft carriers out of ice, reasoning that ice is hard to break. I did wonder about how long it might last in tropical temperatures, although further tests did reveal how brittle ice would be. Oddly, two American scientists proved that by adding wood pulp to the ice would get around this. Considering the current state of our polar regions glaciers breaking off into the sea, I do wonder perhaps that adding wood pulp to them might prevent this.

A few of Kelly Johnson’s other experimental aircraft at Lockheed’s Skunkworks are explored and drones aren’t a new invention. Without having to worry about how much gee-force the pilot has to tolerate, you can go at speeds greater than Mach 3. The key problem was the delivery system off an already speeding manned jet.

Looking at America’s problem of where to house and hide their nuclear missiles, Houghton provides all the alternatives. I’m not so sure if I would agree with him about not being able to spot the head of a vertical missile in the ocean in those days though. You would still need to know where to look and I’m sure the US Navy would have considered submarine patrols to keep the soviet submarines at bay.

Finally, the Moon nuking from the cover title is explored under the name Project A119. This is more to do with 1961 when Russia put Sputnik in orbit and the Americans were considering doing something more startling. You’ll have to read for yourself why not but be grateful that in 1963, all major nations signed up to the Treaty Banning Nuclear Weapons Tests In The Atmosphere, In Outer Space And Underwater and that’s been upheld since.

Oddly, despite the book’s title, I was expecting a lot of oddball plans here that never got off the planning table when in fact many were tried out than just rebuffed out of hand. Author Vince Houghton is curator at the International Spy Museum so in the best place to have access to all the information revealed in this book.

Looking objectively at many of these plans, it does tend to indicate that the various intelligence services and countries weren’t afraid to consider all options and even if they didn’t come to anything would have kept soviet Russia busy trying to gather intelligence and hide real options. You have to wonder why they didn’t play a similar game themselves. Maybe they were kept too busy.

This book makes for some interesting reading and I doubt if you would have come across all of these projects under one cover before so well worth investing.