I often wonder why there aren’t more books about ethnic minorities in comicbooks. As author Michael A. Sheyahshe points out in his introduction to ‘Native Americans In Comic Books: A Critical Study’, this is the first book on the subject and on his own people.

Sheyahshe is a Native American or as he prefers to call it an Indigenous and applies that to any country’s true native inhabitants. Sheyahshe himself is a member of the Caddo Nation of Hasini tribe of Oaklahoma so well qualified on the subject and a comicbook fan. He says not to expect all Indigenous American comicbook characters to be covered but, even checking the index, he hasn’t missed many and included some that I would have overlooked or missed, like Epic’s ‘Time Spirits’ mini-series.

Some of the characters he looks at I would have overlooked and I think Sheyahshe would as well as some are white men adopted into Native American tribes. In some respects, I think he curbed some sentiments but it’s pretty obvious which characters he doesn’t agree with. Sheyahshe points out that he also was able to interview many of their writers as well so gets a balanced view. 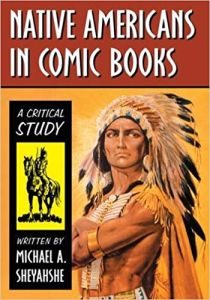 I should point that there is a selection of comicbook pages included to show what Sheyahshe is getting at. Looking at Marvel’s premiere Native American super-hero Red Wolf now, I do wonder how his wolf, Lobo, accepted his master having a wolf’s head on his head.

The Lone Ranger’s companion, Tonto, is explored in some depth, more so as he had his own comicbook where he talked normally compared to the broken English with the Lone Ranger on TV and some comicbooks. Sheyahshe makes a good point that in your native language that you’re bound to have a full vocabulary compared to using English as a second language. I didn’t know that ‘Tonto’ actually means ‘dumb.’ However, I remember and checked up on the meaning of ‘kimosabe’ which was thought to be ‘faithful scout’ but actually is the rear of a horse.

If you think of their dialogue as being sarcastic, it puts a different meaning on their dialogue. I’d love to know what Sheyahsheo thought of the 2013 film ‘The Lone Ranger’, which sort of balances the books somewhat. Bear in mind that this book was originally released in 2008. Topps Comics’ ‘Tonto Redux’ is examined further in and a lot of earlier problems are removed. The Tonto speech pattern is raised a lot throughout this book as to how well other Native Americans speak which really must have gotten under his skin as so many speak normal English. Presumably, he used Tonto as the level for non-acceptability. It’s a long time ago since I saw the TV series of ‘The Lone Ranger’ and can’t remember how Jay Silverheels spoke in them.

Obviously Michael Twoyoungmen aka Shaman of Marvel’s Alpha Flight gets some discussion, it’s a shame that his daughter, Elizabeth aka Talisman, is only shown on a comicbook page. Checking the index about her brevity and found she will be covered in greater detail in the last chapter.

When it comes to the Proudstar brothers, Sheyahshe points out that James aka Warpath didn’t originally have the usual attire Native Americans normally get handed. However, as one of the Hellions, they all wore the same costume. Sheyahshe noted this later so it’s probably me the editor kicking in about information placement. The reason I came up with as to why costume fringe, leather and feathers are used so much with the various Native Americans is it makes for an instant identification of who they are. Not that I don’t think it’s a stereotype but I do understand why it’s used.

Sheyahshe does have it a little wrong here as it wasn’t John Proudstar who chose his costume but Professor X, courtesy of Dave Cockrum. When I wrote my article on super-hero costumes designed to give an instant impression of what you’re facing, knowing you have an angry Indian after you would scare a lot people. As a comparison, Storm’s costume was given a flowing cape to enhance her ability to glide in the air. Colossus’ costume took into account how he grows when he turned metallic. Would John Proudstar be even more annoyed if his ethnicity had been ignored?

Contrary to Sheyahshe’s comment that Thunderbird was killed off because he was unpopular with fans isn’t correct. Giant-Size X-Men # 1 was followed quickly by Uncanny X-Men # 94-95, which was originally going to be GS#2. From interviews, writer Chris Claremont explained the decision to kill Thunderbird had already been decided as a choice between him and Wolverine having similar anger traits and only one was needed and also proof that the new team could be killed.

Had Thunderbird lived, I doubt if his younger brother would have been created. As it is, James Proudstar aka Warpath has actually had a good career. All a matter of timing, I guess. Lest we forget with the X-Men, as Sheyahshe points out, Forge was also Native American and contrary to all stereotypes being wealthy, intelligence and a cyborg. He really had everything.

Tim Truman, interviewed about his work on Valiant/Acclaim’s ‘Turok: Dinosaur Hunter’, points out that Native Americans have to look a certain way because of trademark issues for licensing merchandise. In other words, certain kinds of looks sell, although you do have to wonder as to which audience and age group. Are the old-style westerns that ingrained in modern children?

By this time in the book, I did wonder if there had ever been any Indiginous American comicbook writers. Jon Proudstar, who renamed himself after the X-Men character, did the one-shot Mystic Comics’ ‘Tribal Force’, in 1996. Jay Odjick wrote Darkwing Productions’ 2004 comic ‘The Raven’.

OK, finally, Indigenous American women and as Sheyahshe points out, there are far too few of them. I had a think on that and tend to consider that Native American females aren’t perceived as being the warrior type. It’s a shame the Legion Of Super-Heroes Dawnstar only got a few lines. After all, something her tribe in Starhaven has in common with Tyroc’s African-Americans is both sets of people have left Earth and you have to wonder what happened in the 30th century for self-imposed segregation to happen. I do hope it’s only to stop losing racial identity, more so as there also doesn’t appear to be many Asians in that future neither.

I do agree with writer Jon Proudstar that if you don’t know enough about Native Americans with their history and life style, then you shouldn’t write about them. The thing now is we need more writers from that quarter in comic-books.

Towards the end of this book, I started thinking about whether we had any stories based on Native Americans created in the UK and remembered Johnny Cougar. Created and appeared in ‘Tiger’ (1962-64) and ‘Roy Of The Rovers’ (1985-86), Cougar was a Seminole wrestler. Oh, there was also going way back in ‘The Beano’, an Indian boy called and his comic-strip called ‘Little Plum’ from 1953-1998 and 2002-present. I suspect Sheyahshe might be upset with Plum’s broken English in his early days although looking it up, he speaks better English now.

This is a great book to make you think and hope other ethnicity authors look at the use of other characters in this light. I hope Sheyahshe considers doing a book of significant Indigenous Americans on TV shows. I doubt if there are that many and it would be useful to see what he thinks of them and how they were portrayed. Unlike comic-books, some of the actors were Native Americans, so they must have had some say in their dialogue.