I remember reading some of J.M. DeMatthis and Jon J. Muth’s ‘Moonshadow’ back in the late 1980s, more really for the unique latter’s watercolours than the story itself. Reading it today, I’m not sure if I’ve changed my mind.

In the introduction, DeMatthis pointed out he wanted to do something away from super-heroes and his major influences, although oddly he applied a different set of influences instead and they aren’t that difficult to spot, more so as he mentions them in the introduction and in the extras at the back of this book. He also applies text far more than dialogue.

I don’t know if it’s my eyes or the contrasts created in printing but white text doesn’t always read well and can blur. 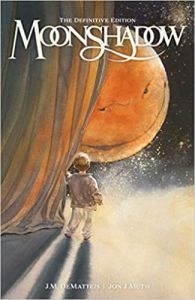 In many respects, ‘Moonshadow’ relies far more on an emotional reaction than action-orientation. Moonshadow is the son of a mysterious alien and the human hippy Shelia Fay Bernbaum aka Sunflower, hence his unusual name. The alien husband quickly disappears and Sunflower has to bring up her son alone.

It is an encounter with the hairy alien Ira that led to them both going off-planet. After his mother’s death, Moonshadow and Ira continue on their adventures. It almost seems a cliché now that they get arrested for crimes, join the military and how they cope afterwards and break up for a whlie.

From my perspective, DeMatthis reliance on text reminds me a lot on how Don McGregor did his Black Panther stories in ‘Jungle Action’ and takes up far too much text space and a distraction from Jon Muth’s art. A feeling that he has to show writing as a means to show he’s there as the writer and does his share of words. In later issues, he does let Muth’s work show more and even text free.

Even so, I do think he should have done a novel to get it out of his system or at least applied more normal comicbook patterns of dialogue than text. After all, the pictures are supposed to represent the text even voice-over. Looking up DeMatthis’ writing history, he certainly diversified successfully, although not into novels. Jon Muth also moved into painting children’s books.

The art is certainly an attraction, even today and still makes it unique and a tad experimental. As I commented above, this is more an emotional than action story and today, I would tend to see it as a unique curio today. Please bear in mind for the time period, it was also one of the first of its kind and worth checking out.