This has to be the longest book from Haynes yet. Not in terms of page count but the length of time. Gemma Lavender’s book title ‘Milky Way: From 13.5 Billion Years Ago To The Infinite Future’ gives it away. You can go further than just after the Big Bang to infinity. Loaded with history as we discover more about the universe we live in. 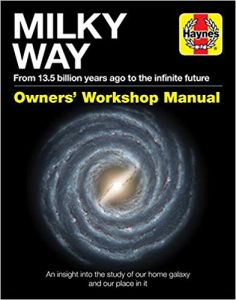 I’m surprised Lavender missed out an important detail regarding Kepler’s proof of the planets orbiting the sun by observing that several planets appeared to flip back on their orbits proving the Earth was going at a different speed and in a different position to them.

What is breathtaking of this book is the photographs of the cosmos and the various descriptive names given. Some, like ‘the Finger of God’ is pretty obvious although I’m surprised that no one has spotted that the photo on page 157 of the two galaxies NGC4038 and NGC4039 looks like a face in profile.

I think it might have been interesting to examine how stellar objects are given names and how some retain their old names now we’ve discovered the constellations are really so many light years apart. There is also a lot of astro-art here from time to time that I wish was identified as to why did what.

I should point out that Lavender is wrong in that exploring nebulae isn’t done in Science Fiction as it frequently pops up in the likes of the various ‘Star Trek’ series, just not in focus of any story outside of, say, ‘The Wraith Of Khan’. Even so, I do take her point that there should be more use of other interstellar phenomenon in SF stories so ensure you get a copy of this book and research the material.

One thing that does become apparent is the universe is not only constantly expanding but constantly changing, albeit in a time period beyond a normal human life-span. Our picture of it is also really of the past when you have to consider how long it takes for light to travel as far as here.

As we know by example what will become of nebulae and such, I’m also surprised no one has speculated as to what the universe might look like today. Mine you, given that we never truly see the current state of universe that’s unlikely. Distance makes everything relative.

Prepare to have your jaw dropped and realise just what a tiny spec in the universe we really are and how much the various Earth-based and space telescopes have brought to us in recent years. We truly live in a Space Age. 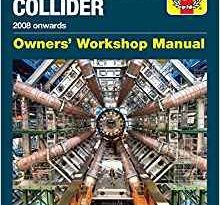