Back in 1975, when I was getting back into American comicbooks and a UK fanzine called ‘The Panelologist’ broke the spell that I should ignore the so-called ‘feud’ that you had to choose between DC Comics and Marvel Comics, that I picked up on the ‘Superboy’ comics to see what the Legion Of Super-Heroes were doing. I somehow missed the Dave Cockrum issues in my absence from comicbook reading but this was my first encounter with Mike Grell and struck by one panel of Mon-el using his cape to capture two felons breaking into their headquarters. He quickly became a favourite for me there and on ‘Green Lantern/Green Arrow’. I wasn’t so keen on his ‘The Warlord’ simply because I wasn’t into fantasy. 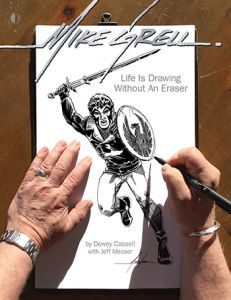 When I heard TwoMorrows was releasing ‘Mike Grell: Life Is Drawing Without An Eraser’ by Dewey Cassell with Jeff Messer, my initial reaction was about time and ready to read. I had to hold back a little because I also had four of their magazines to review first but it was worth the wait. There is always a case of leaving the best for last.

You get a chronological order of ‘Iron’ Mike Grell’s life. He’s also the first comicbook artist I’ve come across who’s completed the Famous Artists art course although he doesn’t say who was his tutor. As he describes, Grell ltookat a lot of different sources to get his grounding in artwork. While taking art classes after leaving the army, he was moonlighting for various companies before working for Dale Messick on her newspaper strip, ‘Brenda Starr’. I liked the way he describes how to get her inking style was to limit himself to 3 hours on the last day to get her spontaneity.

Grell’s first work for DC Comics was a 7-page ‘Aquaman’ story in 1973 after a recommendation by Irv Novick to go to their offices. From there, he pencilled ‘The Legion Of Super-Heroes’ and designed Dawnstar and Tyroc along the way. The latter is interesting because Grell had to fight to get a black character into the team but was given an odd criteria for both his power and how all the black people were on an inter-dimensional island which he saw as racist and decided to rebel by going the disco white costume route. Even so, I think I would have given him a better costume than parody one.

There’s a huge body of work Mike Grell has written and drawn that I haven’t seen but am better informed about them from this book. In his interview about ‘The Longbow Hunters’, Grell himself reminds that he’s seen as an artist who can only draw one face. Seeing his work here, I would agree when it comes to his hero leads, look at Morgan Travis, Oliver Queen, Sable and even one sketch of Superman, as he gives them all the same long aqualine noses. However, the samples shown here with his supporting characters do show he does far more. I also thought he always gave his male characters distinctive hair wings and sideburns as a quick way to recognise his people. I did have a quick look at Mike’s website and he still does spectacular women.

For people of my age, you’ll recognise the name and want this book. If you’re younger, it might well do to remember that the TV series of ‘Arrow’ was based on his ‘The Longbow Hunters’ and even the Iron Man films reveal of Tony Start revealing his identity was first done in one of his stories for Marvel.

To say this is a fabulous book is putting it mildly. You see samples of all the work Grell had done over his long career and learn a lot along the way.