Any book, whatever the genre needs humour. In life, there is rarely unremitting bleakness, there is often something to lighten a mood, however small and fleeting. So in fiction, for a character to be rounded, humour is necessary, if only to give the reader a chance to appreciate the dire peril the author has put his characters in. At times, events only appears to be funny well after the situation has been resolved. Almost always in fiction, the humour comes out of the juxtaposition of elements but to write a whole book in which the humour is the relentless part and to make it consistent is hard, especially as readers find different things funny. Just because the author has enjoyed themselves writing it, doesn’t always mean it will work for everyone. 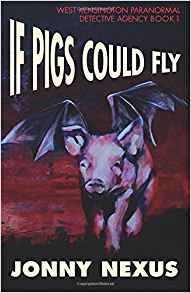 From the start of ‘If Pigs Could Fly’ there is a sense of the ridiculous in a good way. Ravinder Shah, founder of the West Kensington Paranormal Detective Agency, which so far hasn’t detected any paranormal activity, actually works for social services. Now he is pursuing an investigation into flying pigs in Yorkshire. With him are the Professor, one of Rav’s elderly clients, and Jess the Border Collie. This is the investigative team.

When the flying pigs turn out to be real and vampires Rav believes he has his first real case. They chase the pigs away and they seem to fade from the action despite not actually being dead, but Rav wants to find out where they’ve come from. Using convenient clues and the help of a woman who calls herself Reece, the team end up at a vampire convention in Whitby. There, Rav encounters Alan, a real, rather wrinkled three hundred year-old vampire. Alan agrees not to kill Rav if he’ll find Tabitha, Alan’s on-line girlfriend, and persuade her that she wants to meet him. From then on, it begins to get very dangerous with Rav and his team finding themselves up against opponents with much greater ambitions than the vampires. The action takes place over a wide-ranging swathe of Yorkshire

Rav, like so many, dreams of a much more exciting life than that handed out to him. While I can’t fault him for trying to break out of the rut, he appears to be playing dangerously with his career. Despite the last minute revelation in the novel, I have difficulty with the idea of a social worker signing a client out of a hospital or care home for weekends and failing to return him at agreed times. His actions here would surely lead to disciplinary action in the real world. We also never find out how Rav, the Professor and Jess team up in the first place. The incongruity of the threesome needs some back-story.

Jonny Nexus manages to sustain his brand of humour throughout the novel but there are many references thrown in that readers under thirty may well be baffled by. If they were in the context of comments from the Professor, they could be passed off as a quirk of his age but, too often, they belong either to Rav or the authorial voice.

With its hectic pace, this is the kind of novel which would make a good animated film or even a graphic novel. It will be enjoyed by readers who like their humour on the farcical side. 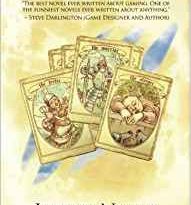