Books on special effects and SF fans are sure-fire hits and make a natural fit. Not only are the special effects people contributing to many of the films we watch, but we also admire the work that they put into their jobs. I’ve still got Rick Baker’s gigantic two volume books of his work, bought a couple years back, sitting sealed waiting for a time when I can sit at a table and read it without giving myself a mischief if I tried to read it in bed. 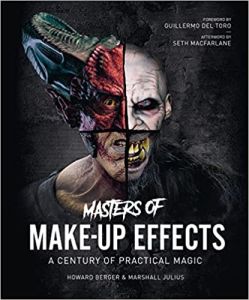 In their introduction to ‘Masters Of Make-Up Effects: A Century Of Practical Magic’, make-up artist Howard Berger & journalist Marshall Julius eventually found time to write it when covid first hit. What I didn’t expect was 50 special effects people and actors who’ve been heavily made up discussing each other’s favourites and a multitude of photos, many I haven’t seen before.

Something that quickly becomes apparent is that there is a combination of friendly rivalry and admiration for each other for the work they do. Of course there are icons in the industry, everyone from Lon Chaney to Dick Smith to Rick Baker to Rob Bottin. It’s rather interesting to read the WETA special effects team in New Zealand brought across, in successive years, Ray Harryhausen and Dick Smith as guests as treats for themselves because of their admiration for them.

The second chapter is more about what inspired some of them to becoming make-up artists. Hardly surprising with some of the older ones that ‘Famous Monsters’ and Aurora model kits had some influence back in the way when there was so little to choose from. I also like the number of kids who experimented with their mothers’ make-up bags and the number of parents who encouraged their talents as well. It should make you wonder how many fell by the wayside when they weren’t encouraged.

I did wonder how they would cover the late great Stan Winston and we get a couple stories from his son, Matt, on how he came home made up to scare them when young. If nothing else, it shows these make-up artists have that playfulness that keeps us geeks young at heart.

It’s rather interesting reading about George Lucas prepping for the first ‘Star Wars’ film had little idea what he wanted in the cantina and left pretty much all the work to Stuart Freeborn’s crew and the models fate at the end, just to be dumped. Reading behind the lines here, ever Lucas didn’t really think his own film would be that much of a success. I thought that couldn’t be beaten, but Steve Wang who developed the original Predator costume also has the original illustration of how he saw the original armoured hunter.

I do stand corrected at the absence of TV work as we see Neil Gorton’s work on ‘Doctor Who’ and how the Fallen Angels were made to work. Don’t blink. There’s smidgens from ‘Buffy’ and ‘The Orville’ but the work is mostly that of films here.

A technical point for all you designers, don’t make a mechanised head more than weighing 20 pounds because the person inside, even when extremely fit, can’t support such weight for long.

One thing that does become apparent from reading remarks from make-up artists and the actors they made up is a mutual respect for the art. Any actor who is hesitating over heavy duty make-up needs to read this book if for no other reason than reassurance that everything will be done to ensure they are looked after in and out of the make-up chair.

Don’t think this book is all fun. ‘Chapter 14: War Stories’ covers one things go wrong, either with people or settings. Certainly they are lessons in how to handle such situations although it certainly proves some people, not the make-up people fortunately, are definitely in the wrong jobs and in their own fiefdoms. Stan Winston being taught to have fun at his job by actress Bernadette Peters is a good philosophy.

The advice shared by the make-up artists in the final chapter should help any of you wanting to break into the industry. The most potent ones were not to use any work from school but what you did on your own and show as many different types of work as you can in your photo-portfolio and certainly pay attention to any advice you get from the professionals in areas you need to improve upon. Dick Smith pointing out the difference between two photos, with the latter after giving advice is startling. You are always learning.

I do think the biggest reaction from reading this book that in this world of CGI effects, there is still a need for physical make-up artists, not only for transforming people but creating creatures, as witnessed for an updating but never used version of the Creature From The Black Lagoon on page 131 that was never used. Saying that, it would be nice to see a companion book looking at the CGI equivalent and for both, the television equivalents. ‘Buffy The Vampire Slayer’ is hinted at but there is so much more that needs acknowledging. Even the make-up artists think CGI can complement their work.

If you’re going to buy any book this year, then make sure it is this one. I have had one of the most pleasant experiences taking a week to read this book, loving the photographs and the insights, more than the ones I’ve mentioned here, gained from this book on many films I’ve enjoyed and a few that I will have to find time to check out. Enjoy with relish as long as you choose the right colour blood.