The sub-title of John Richardson’s book, ‘Making Movie Magic’, is ‘A Lifetime Creating Special Effects For James Bond, Harry Potter, Superman & More’. Quite why ‘Aliens’, more so as it won an Oscar for special effects, wasn’t included on the cover but then you’d be adding a lot more films and there simply isn’t enough space. 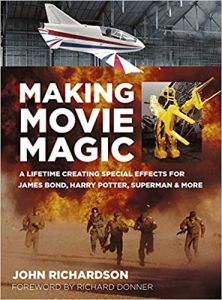 John Richardson, at the age of 16, joined his dad, Cliff Richardson, who was a long-time film physical special effects artist, specialising in explosives. Learning the ropes, literally, he went onto work with a long list of directors and a lot of films. Once, even as a limited stand-in when no one else was available but never again, he preferred behind the camera. Don’t expect precise details of what he did but from an anecdotal point of view, he gives a lot of information from his entire career. His film list is incredibly long and with a lot of photos to go with it. There are 100 films noted in his filmography from 1960-2011. If you live in the UK and been watching Channel 81 then you will be making connections to a lot of films here.

Richardson’s first film alone was ‘Duffy’ (1968). On occasions, he could over-rule the director when something was obviously going to be dangerous to the cast. He could also work out how close the actors could be to an explosion as well.

The amount of snippet information that comes up as throwaway is its own reward. Cliff and John Richardson made the sniper rifle that was used in ‘The Day Of The Jackal’ and transporting it across countries by air was more a matter of dismantling it and including it in a toolbag. If the Jackal had known that, his life would have been a lot easier going for his target. Keep a notepad by you because when you hear about some of these films, you’re going to want to see some of them if you haven’t seen them before.

The anecdotes and insights into production and actors made for great fun. As a special effects man running his own team, Richardson flits from film to film, depending on how much he is needed. Where he comes into his own is offering solutions to effects shots that brings the costs down. I think my favourite giggle is Richardson lining up to shoot Roger Moore as Bond wearing milk bottle lens glasses. I do think I’m going to be rewatching some films again with some of these things in mind.

Oh, Johnson’s team also built the powerloader for ‘Aliens’ based off Jim Cameron’s design and there are some photos of it here that you might not have seen before. He was also part of the team getting the Oscar for special effects.

Interestingly, when it comes to the Bond films, he shares my sentiments that the likes of the invisible car was going too far. When you consider how many of the Bond films he worked on, you can’t get more authoritative than that.

For those of you who want to get behind the magic of the 8 ‘Harry Potter’ films he worked on, then you’ll have a field day here and a lot of photos. At the back of the book, there are 61 posters and including all the ‘Potter’ posters.

The main criticism for this book is that there aren’t enough captions to go with most of the photographs. Granted, it can be inferred from the text and if you have a photographic knowledge of films can make the connections without them but it’s a serious omission. In the end I counted only 9 captioned and that was for identifying people. Not that I was expecting details for each photo but noting the films would have made for an easy reference

Even so, this is a mineful of John Richardson’s films. It does give some insight into the need to travel where the work is, be inventive and not to take unnecessary risks to anyone. Having a sense of humour is an obvious asset. It made for an easy read and a lot of chuckling. If you didn’t have respect for physical special effects in films before, you will now, especially in how you can be fooled. Look twice at the size of things.