British astronaut Tim Peake is no longer no longer floating ’round his tin can . . . Tim and two fellow crew members from the International Space Station returned to Earth at 5:15 a.m. EDT Saturday after wrapping up 186 days in space and several research studies in human health.

Soyuz TMA-19M braked from the Station’s cruising speed of almost 28 800 km/h and entered the atmosphere shortly afterwards. The crew module separated as planned and parachutes deployed to slow the vehicle even more.

Retrorockets fired moments before landing and springs in the moulded seats reduced the impact of hitting the ground at 09:15 GMT. Teams were on hand within minutes to help them out.

Flight engineer Tim Peake of the ESA (European Space Agency), Commander Tim Kopra of NASA, and Soyuz Commander Yuri Malenchenko of Roscosmos touched down southeast of the remote town of Dzhezkazgan in Kazakhstan.

The crew completed the in-flight portion of NASA human research studies in ocular health, cognition, salivary markers and microbiome. From the potential development of vaccines, to data that could be relevant in the treatment of patients suffering from ocular diseases, such as glaucoma, the research will help NASA prepare for human long-duration exploration while also benefiting people on Earth.

Tim Peake’s Principia mission was an eventful and busy six months in space. In the first month after his launch on 15 December 2015, Tim conducted a spacewalk. He also drove a rover across a simulated Mars terrain from space and helped to dock two spacecraft.

Tim took part in numerous experiments for ESA and international partners. Highlights include using the Space Station airlock to study Tim’s lungs, monitoring his sleeping patterns to learn how humans adapt to life without normal daylight, and recording how many calories he consumed to prepare for missions further from Earth.

Many experiments ran continuously while Tim and his crewmates were maintaining the weightless research laboratory. ESA’s Expose facility was returned to Earth after submitting organisms and chemicals to 18 months of travelling unprotected in space on the outside of the Station.

The Solar facility on Europe’s Columbus laboratory module continues to monitor our Sun after eight years of continuous observations. Another facility is tracking ships as the Space Station flies overhead.

Aside from his maintenance and science duties, Tim also enthralled the world via social media and ran a marathon in space. The next ESA astronaut to travel to the Station will be Thomas Pesquet of French nationality, scheduled for launch in November.

The BEAM, which arrived in April on the eighth SpaceX commercial resupply mission, was attached to the space station and expanded to its full size for analysis over the next two years. The BEAM is an example of NASA’s increased commitment to partnering with industry to enable the growth of commercial space, and is co-sponsored by the agency’s Advanced Exploration Systems Division and Bigelow Aerospace.

Two Russian Progress cargo craft docked to the station in December and April, bringing tons of supplies. Kopra and Peake also led the grapple of Orbital ATK’s Cygnus spacecraft to the station in March, the company’s fourth commercial resupply mission, and the SpaceX Dragon spacecraft in April.

This is Major Tim to Ground Control
I’m stepping through the door
And I’m floating in a most peculiar way
And the stars look very different today. 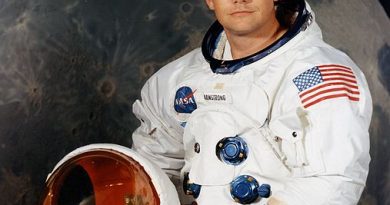 2 thoughts on “Major Tim: no longer floating ’round his tin can.”