‘Literature®’ is an odd little book. That’s odd in an odd way, not odd in a bad way and that’s partly due to it being set in an alternative universe where things are just a bit different to what we consider normal in this universe. You can’t even put a date on when the events are happening but it’s possibly a bit in the future. 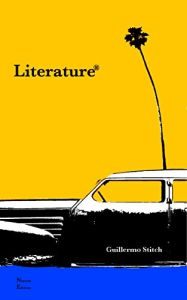 The main character is Billy Stringer, a sports writer for a local newspaper. In fact, it’s the only newspaper as the printed word has taken a decidedly turn for the worse in Billy Stringer’s universe. Book burnings are encouraged while people who read literature in the traditional paper book are considered terrorists.

Billy, against his better judgement, takes on an assignment to cover a product launch at Gripping Tails® after a colleague falls ill. It’s a radical change to his normal sports reporting and the start of what’s going to be a rather difficult day. The 4am product launch is a new transportation system where the road is literally the page.

Billy sticks out from the assembled gaggle of press reporters for a number of reasons. He’s recently split from his girlfriend, Jane, who’s retained most of his clothes, so he’s had to improvise with an odd clothing ensemble. But there’s something about Billy that brings him to the attention of the Gripping Tails® management. Asked to stay after the other reporters leave, he’s offered a job with Gripping Tails® and has just 24 hours to decide. It could be life or death for Billy.

Whatever his choice, Billy decides he must see Jane one last time to explain the choices he’s made. That might be a hard thing to do as several people want Billy dead. In this universe, nobody is going to ask any questions should Billy meet an untimely end.

The particular writing style threads the current events through a series of flashbacks to earlier times. Through these flashbacks we learn how he met Jane and then lost her. There’s a lot of other things we learn this way, such as how he accidentally became a terrorist. The downside with this particular writing style is that you have to pay attention as things can get out of sequence rather quickly.

The story timeline from Billy’s early morning press conference to the books ending is only one single day. It seems a lot longer due to the flashbacks which are quite detailed in places. It’s only 93 pages long but packs in a lot of new ideas. This is both a good and a bad thing as some things are glossed over. I’m still not clear as to why reading literature was so bad for society for example. Perhaps a re-read is called for.

For a debut novel, it’s a quality piece of work with good characters and a strong if odd plot. I thought the ending was a little rushed, but it is a proper ending with no loose threads left dangling. It’s also nice to read a book from Amazon which isn’t littered with typos and badly in need of a good edit. As I said, ‘Literature®’ by Guillermo Stitch is a quality piece of work and a rather good read. Well worth the £2.22 asking price.

One thought on “Literature® by Guillermo Stitch (book review)”