Wes Anderson gives us ‘Isle Of Dogs’, a Science Fiction animated film in which the characters are intelligent dogs who talk like humans. We are twenty years in the future, in Japan and we are in the middle of a war of humans of the Kobayashi Clan against an overloaded population of dogs. The human city intends to exile all dogs to an island-sized trash dump.

There the dogs will be in quarantine. Is this fair to the dogs? They do not think so. The plan is being angrily debated. We flash to Trash Island ruled by exiled dogs. There the dogs are getting used to their new home. But it is clear things cannot go on as they have been. The story is itself could be better, but the film is a treasure trove of ideas, some cute and some engaging. There are even more ideas than in director Wes Anderson’s previous film, ‘Grand Budapest Hotel’ (2014).

Wes Anderson has not yet made a name for himself that readily comes to mind in discussions of the best contemporary animated fantasy films and their makers. That is probably just because while many of his films include some animation, it is generally just to add a small piece of humour. His main body of work is live-action comedy. Yet where he uses animation as he frequently does, humour is an indispensable part element of his overall quirky style.

Anderson has his own group of actors who are likely to show up in his films who might almost be considered as his own repertory company: Bryan Cranston, Edward Norton, Bill Murray, Jeff Goldblum, Bob Balaban, F. Murray Abraham, Harvey Keitel, and Tilda Swinton. Also being heard from are Kunichi Nomura, Ken Watanabe, Greta Gerwig, Frances McDormand, Fisher Stevens, Koyu Rankin, Liev Schreiber, Scarlett Johansson, Frank Wood, and Yoko Ono. The idea of having dogs who talk like humans may well have been inspired by the novel ‘City’ by Clifford Simak.

I was never very fond of the older Wes Anderson films going back to ‘Rushmore’, but his style has been steadily improving. I really enjoyed ‘The Fantastic Mr. Fox’ and especially ‘Grand Budapest Hotel’. These films are nearly unique.

Alexandre Desplat composed the score to have a very Japanese atmosphere. It is composed of wooden blocks and chanting. Also Anderson has named the film in such a way that one cannot purchase tickets without declaring love of dogs. Full disclosure: I do love dogs and, until I get one, I rate ‘Isle Of Dogs’ a high +2 on the -4 to +4 scale or 8/10. 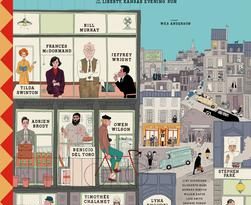