I should point out that ‘Illustrators: The Art Of Sydney Jordan/The Art Of Jim Holdaway’ is a limited 1000 copy print run and there are only 10 left now, so get a move on if you want a copy.

Sydney Jordan (1928- ) is mostly known for his ‘Jeff Hawke’ SF newspaper strip. Brian Bolland does the introduction as he helped Jordan out for a part of a story and did the two covers for two of Titan’s reprint books on the subject. What does become clear is Jordan wrote and drew, but equally, he switched roles to bring in artist Colin Andrew who textured in brushline than tones like Jordan did. Looking at how close Jordan was to the print schedule, by a matter of weeks, it probably relieved him from time to time. The checklist shows the division of labour and how not only Brian Bolland but also Paul Neary and Martin Asbury contributed during the ‘Jeff Hawke’s run.

We also see the only existing pages of ‘Invasion Of The Drakkons’, Jordan’s attempt at a comicstrip although I think I would have liked to have seen more of ‘Earthspace’.

The last third of this book is devoted to Jim Holdaway (1927-1970). He had originally drew the ‘Daily Mirror’ newspaper strip ‘Romeo Brown’ with writer Peter O’Donnell. When the Daily Express wanted a James Bond equivalent, O’Donnell was asked to come up with something that became Modesty Blaise. When Frank Hampton couldn’t find the necessary edge, O’Donnell recruited Holdaway and the rest is history. I have to confess that I haven’t seen ‘Romeo Brown’ until now. In comparison, the style is more cartoony for Brown himself but the women showed how good an artist Holdaway was. Holdaway’s other work, shown here, is also in westerns and detective strips. With his life cut short by a fatal heart attack, there is little known about Holdaway’s life and his art has to speak for itself.

I should point out that there is a lot of art, mostly in black and white, in this book from both artists. For the inkers amongst you, this is a field day at looking at their techniques in close-up. Although there is room for pen and brush or both, brush can be awfully expressive if you have good control of its stroke, especially with constructing hair. It also teaches the effective use of empty space to be effective.

Don’t miss it if you can. 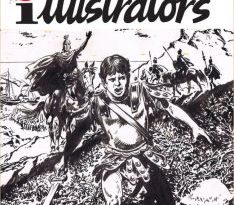 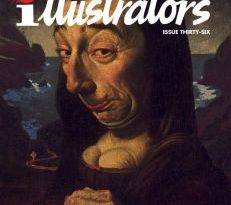 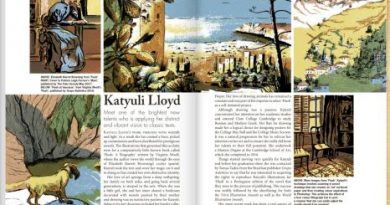