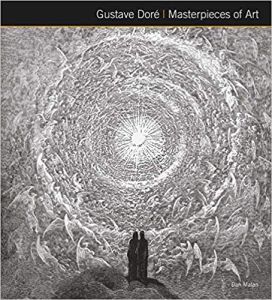 I’ve mentioned French artist Gustave Doŕe (1832-83) before but in this ‘Masterpieces Of Art’, Dan Malan shows how much he has influenced people of our time in everything from album covers to films. Looking at a picture here on page 24, there’s even a certain Wookie, although you would have to wonder if Robert McQuarry or George Lucas was the most influenced. Considering Doŕe’s books have always been in print and, even in pre-digital, if you saw one in a shop and saw the intricate art, you would be drawn to buy a copy.

Doŕe was a natural artist and at the age of 12, burst into publisher Charles Philipon’s office to show his pictures and then had to prove he did actually and drew more in front of him. Philipon convinced Doŕe’s father to leave him and Doŕe had a profitable job.

Bear in mind the time period, Doŕe’s main work was engraved on to wood and then coated in metal to last and hence the sharpness of his illustrations. He had engravers working for him but even so it was an intricate amount of work. His colour work was equally good, although little is shown here.

Wanting to get into books, he couldn’t convince the publisher Hatchett that an expensive book would sell so put up his own money for a limited edition through them of 100 copies that promptly sold out so is practically one of the first self-published artists, albeit under the Hatchett name. It’s also fascinating seeing other familiar publisher names popping up showing how old they are as well as he worked for them as well. Oddly, the only place he had copyright issues with was the USA, mostly because they didn’t have any at the time. Nevertheless, Doŕe’s output was phenomenal, bringing pictures to life from all manner of subjects from the Bible to mythology and especially our fantasy domain. His output brought him an early death but looking through this book, what a legacy to leave behind.

Doŕe had a huge following but a lot of dissent from the French Salon jury because he had no formal training. Part of me thinks that hasn’t changed much today, especially for commercial artists. The arts have always depended on creativity and not necessarily on established training. If that doesn’t prove this then such regimes need to be changed.

Looking at Doŕe’s work, the amount of texture that presented depth is truly staggering and probably had an influence in the development of commercial tone in the next century.

The more I got engrossed in his work, I couldn’t help thinking that part of the reason for so much texture detail was to balance the etching for an even impression when inking. After all, there wasn’t any parts that were entirely in black or white. However, in the latter section of this changed with some obvious white sections and the final two pictures that appeared to be done on a new engraving system that had full blacks and could pass for paintings.

If you want a ‘we are not worthy’ thought to creep through your head, then get this book, Gustave Doŕe’s work was the groundwork for others that came long after and certainly deserves a place in your artbook collections.