A ruthless empire strives to conquer every planet and destroy every alien race, controlling its subjects and ensuring their loyalty through indoctrination and conditioning. On a remote planet, a beleaguered rebellion plots to withstand them. Elizabeth May and Laura Lam have cooked up an entertaining twist on the ‘galactic empire versus rebels’ trope in the fast-paced novel ‘Seven Devils’. 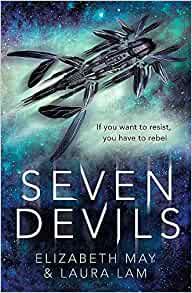 I suspected that I’m not really the target audience for this book when I saw that one of the main characters was a princess. It always amazes me how many princesses are available to star as the main characters in numerous movies and books. Princess Discordia was heir to the empire before turning her back on her legacy and joining the rebellion. Sent on a mission to investigate a secretive shipment, she ends up teaming up with four other young women on a desperate mission to save a possible peace accord from being scuppered by her brother, Damocles, the new heir.

There’s a very interesting concept that ties the empire together: the Oracle, which provides the brainwashing through training batches of vat-grown children and also through implants that keep them loyal and in line. The Oracle is everywhere, in every AI, in every ship and in every brain and is a constant threat to the rebellion. The former empire citizens who have broken free of their programming to join the rebellion make for a fascinating and well-conceived group of characters. The history and tensions between them, their weaknesses and personal demons create an ongoing tension throughout the book.

The thing that kept knocking me out of the narrative throughout the novel was the seeming confusion over the physics of space travel and astronomical terminology. As they travelled from planet to planet, the words ‘galaxy’, ‘quadrant’ and ‘sector’ are used in contexts that don’t especially make sense and planetary conditions appear to depend on their location in the galaxy. Two galaxies are described as being separated by an asteroid belt and, at one point, their ship starts a descent to their target planet and then enters the quadrant a while later.

It made it hard to picture what was intended. It’s the kind of thing you have to ignore and just enjoy the action.

There’s plenty of action to go around, too, with ships to be hijacked, pursuits on the ground and in space, breaking into palaces and sneaking around in disguises. Elizabeth May and Laura Lam have certainly thrown in a whole lot of ingredients together, mixed in with an interesting and well-developed cast. It’s most definitely space opera though, with no hard SF elements whatsoever to explain any of the technology, no particular adherence to physics or anything concrete to lend any consistency to what type of space travel is employed in the Empire.

If you’re happy with light, adventurous space opera though, it’s all great fun. 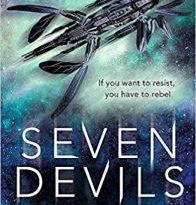 Seven Devils by Laura Lam and Elizabeth May (book review).

Seven Devils by Laura Lam and Elizabeth May (book review).