Well the Halloween season 2015 is upon us now and what better way than to cozy up to the youngsters at the box office than offering the innocuous tingly treat ‘Goosebumps’? The goofy-minded family-friendly frightfest does have the ingredients to muster up some interest for the little goblins out there looking for hearty rounds of boos and bumps. The question remains: does ‘Goosebumps’ have the mindless macabre-related mayhem to sell its scatterbrained scary tactics to the trick-or-treat tykes looking for off-the-cuff jitters on the big screen? Director Rob Letterman has armed the frivolous ‘Goosebumps’ with aimless zaniness anchored on the nutty shoulders of the film’s leading kinetic kook Jack Black. Unfortunately, the loose presentation of combined live action and animation imagery put forth in ‘Goosebumps’ seemed rather strained and misplaced. Sure, it is noted that ‘Goosebump’s reinforce a wackiness rooted in nonsensical hilarity…something considered safe and suitable for the kiddie crowd.  Nevertheless, Letterman’s breezy kiddie creepy caper, even with the free-spirited Jack Black at the helm, registers with a lameness that would have some demanding youths rolling their eyes  for something more hip and edgy.

‘Goosebumps’ is from the imaginative mind of R.L. Stine who has authored the vastly popular children book series while selling millions of copies worldwide. Stine’s aforementioned ‘Goosebumps’ book collection for young adults (YA) have led to a successful Saturday morning cartoon series as well. Now Sony Pictures Entertainment wants to capitalise on the craze and tap into the youngsters’ consciousness with outlandish Pied Piper Jack Black heading up the charge in this toothless tale of juvenile high jinks.

One would think that ‘Goosebumps’ could up the ante a bit with the backers involved such as screenwriter Darren Lemke (‘Jack The Giant Slayer’) from a story by Scott Alexander and Larry Karaszewski. Both Letterman and Black collaborated on the dud ‘Gulliver’s Travels’ thus corrupting the Jonathan Swift literary masterpiece with their big screen bomb. Black, who stole the show with his mini-sized co-stars in ‘School Of Rock’, would be an ideal choice to appear in another children-themed entry mired in outrageous fortune. Unfortunately, ‘Goosebumps’ merely chalks up its sketchy existence in being a jumbled ball of flimsy foolishness while never really connecting solidly with a cohesive story that brings the frenzied proceedings together. Besides, what could ‘Goosebumps’ the movie offer in freshness that the countless Stine books and animated program had not touched upon before in its adventurous skin? The answer: not very much.

For teenager Zach Cooper (Dylan Minnette, ‘Prisoners’) the transition in moving to the bedroom community of Madison, Delaware from the hustle and bustle of New York is quite a letdown. Zach’s recently widowed mother Gale (Amy Ryan) relocates for a new job offer and Zach has no choice but to accept his new less-than-stimulating surroundings. However, the one discovery that is about to make Zach a little more accepting of his new home is the pretty neighboring Hannah (Odeya Rush). The main obstacle that stands in the way of getting to know Hannah, sadly, is her over-protective father in stand-offish writer R.L. Stine (Black). The flustered Stine has some major issues with the creativity process when conceiving his characterisations.

Soon Zach would have to join forces with the Stines and nerdy best buddy Champ (Ryan Lee, ‘Super 8’) when he accidentally unleashes R.L.’s monstrous creations onto the small unsuspecting town (it turns out that Stine’s fictitious beastly book protagonists are in fact real menaces come to life). Can Zach and company save the day as these bothersome pests roam the unprotected streets at will? Will Zach earn extra brownie points in winning Hannah’s heart as well as her reclusive father’s approval?

It is a mixed bag reception for the scattershot ‘Goosebumps’. On one hand’ many of the ardent followers of Stine’s written work will recognise the inclusion of some familiar notable villainous visitors that feature ‘The Abominable Snowman Of Pasadena’, ‘Revenge Of The Gnomes’ and ‘Werewolf Of Fever Swamp’ (let’s not forget Slappy the evil ventriloquist, too). Plus, some would consider it a bonus in having Black’s unflappable voice-over work earmarked for some of the standby monsters wreaking havoc in random fashion. The CGI special effects register with some semblance of awestruck momentum. Still, the manic moments piggyback one another and the cheap giggles, sight gags and punchy predicaments feel needlessly forced.

Strangely, Black seems somewhat restrained as Robert Lawrence Stine. In fact, Jillian Bell’s off-the-wall Aunt Lorraine is more of an energetic comical force than the usually high-strung Black. Both Minnette’s Zach and Rush’s Hannah are somewhat serviceable as the Romeo-and-Juliet tandem but they could have played up their on-screen chemistry more charmingly than what was presented by them in inexplicable blandness. As for the supporting adult players they arbitrarily pop in and out without a chance to fully realise their contributions in this flimsy farce geared at the indiscriminate pee wees.

Perhaps the tots will get a decent rise out of the jolly emptiness that is ‘Goosebumps’. As for the rest of us, we will probably get a better result in sucking on last year’s recycled stale Halloween candy. 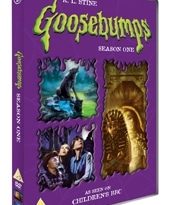