The first thing that struck me about Jay Schiffman’s debut novel ‘Game Of The Gods’ was the characters’ quirky names, which struck me as somewhat Vancian and made a nice change from the usual run-of-the-mill popular name derivatives. There are characters called Dariox Vinyl, Pique Rollins, Spiro de Yerusalom and Veriton Glass. Some of these characters only have minor parts to play and some don’t last too long in the company of the viewpoint character Judge Maximollion Cone, but they all make a lasting impression by their vibrant names and equally idiosyncratic characteristics. 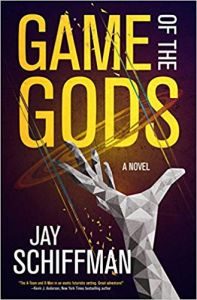 The story takes place 250 years after the end of the Old Order, some unspecified time in our future, though terms of centuries are mentioned for some nations and organisations. The world is divided into several nations and associations with names that seem almost familiar, marked by geographical landmarks that are also vaguely familiar. This intriguing background forms an extra layer of interest to the breakneck story of Judge Cone and his whirlwind flight from enemy to enemy and ally to ally.

Starting the book as a senior judge for the Federacy, Cone soon finds his life turned upside down by precocious and enigmatic Pique Rollins, a young girl who is a citizen candidate. Despite her youth, she has remarkable abilities and seems to cast a spell over the judge. With barely time to figure out any of the intro, we find the judge cast into world of terror and despair, forced to fall back on his old military skills to survive assassination attempts, explosions, kidnappings, revolutions and destruction. He is joined along the way by some of Pique’s relatives and other odd characters who appear to have drawn the attention of the Holy Father, a religio-political papal figure with an inscrutable agenda and a fascination for mathematics and genetics.

Jay Schiffman has written an entertaining and quirkily original book in which he has thrown out many of the standard tropes of Science Fiction and recognised hierarchies of post-apocalyptic worlds. It has the feel of something that is Dune-like but hyped up into something a whole lot more anarchic. Sometimes the action seems not too well thought out, with the main character Judge Cone displaying almost super-human feats of strength and stamina. He carries fully grown adults, including a pregnant woman, on more than one occasion. Even across a high wire, he defeats unfeasible amounts of enemies in close confines while nobody else apparently moves. From a seated position, he leaps behind his chair. The action is sometimes so thick and fast that there is not time to pause and consider the likelihood of any of it. There is an enormous amount of energy in this book and an enthusiasm in the prose that is infectious. By the end of the tale, many of the characters were still an enigma and what was to become of them was unclear, but it was certainly an entertaining trip.