It is one thing to grasp the copycat concept of capitalising on a clever trend in horror moviemaking and extending the gruesome appeal into something more mainstream and profitable. However, when the so-called trend is beaten to death at the hands of clumsy opportunists looking to milk the genre for what it is worth then we need to call a serious time out.

In the soggy-minded ‘V/H/S’, audiences are asked to check their gory imaginations at the door in favour of accepting the ‘found-footage’ horror shenanigans with a slight twist. Nearly a decade ago, horror fans experienced an entertaining twitchy treatment with the spontaneous and innovative ‘The Blair Witch Project’ that had many rethinking the way they wandered into the woods. Years later, the ‘Paranormal Activity’ phenomenon created a new spark as it charged up the horror show high jinx with newly injected enthusiasm in shock value. Of course, there have been several pretenders since that time to take advantage of the horrific found-footage rage but with overwrought, uneven results.

Woefully chaotic and carelessly gimmicky, ‘V/H/S’ is a prolonged and problematic horror anthology that shoddily knits together six edgy short stories and ties it all in one thumping theme that is trivial, nonsensical and illogical. Predictably, the morbid morsels in ‘V/H/S’ sing about as soundly as a lethargic hummingbird with laryngitis. Clearly, ‘V/H/S’ misses the opportunity to be innovative particularly when recalling the one time out-of-date video technology oldsters fondly remember as the VHS tape. Overall, the sluggish execution for V/H/S feels artificially realised.

The lopsided story concerns the destructive antics of riff-raffish young males hired by an unknown source to cause havoc as they foolishly attempt to break into this seemingly desolate home and retrieve a revealing VHS cassette tape. Prior to this assignment, the idiotic knuckleheads pretty much basked in the sordid joys of filming themselves destroying random lives as well as creating impromptu property damage.

The perilous prank of busting into this mysterious house while ransacking it backfires, as an old inhabitant of the place is found dead. To make matters worse, the miscreant intruders end up recovering several VHS cassette tapes that are disturbingly gross. Noticing an old VHS player hooked up, the boneheaded bunch view the cryptic footage that brings about the dire circumstances at hand. Hence, they have to determine which terrifying tapes is specifically the one that they are seeking in haste.

Naturally, the video shorts being watched are comprised of the eerie vignettes that depict all sorts of weirdness stemming from various filmmakers and their seedy segments. The macabre shorts highlighted vary in effectiveness from the slightly preferred selections ‘The Sick Thing That Happened To Emily When She Was Younger’ (Joe Swanberg), ‘10/31/98′ (‘Radio Silence’), ‘Tuesday the 17th’ (Glen McQuaid), and ‘Second Honeymoon’ (Ti West) to the meager introductory bit ‘Amateur Night’ (David Bruckner). Director Adam Wingard provides the main framework of the story that bridges these gory accounts and bonds them in empty-headed surrealistic titillation.

Basically, ‘V/H/S’ wants to juggle its corrosive commentary in the variety of distinctive areas that encompass technology intrusiveness, sexual hedonism, voyeurism and tickling the exploitation of horror-cringing to a whole new level of sinister-inducing insanity. Unfortunately, ‘V/H/S’  is nothing more than an erratic and aimless experimentation that comes off as nauseating more so than penetrating. This is a crying shame because this horror-making hokum had an intriguing premise to play with at large but the incoherency and implausibility of the gimmicky intent leaves this hollow horror showcase punishing us more so than the despicable douche bags posturing impishly within this fettering frightfest.

Supposedly, ‘V/H/S’ is central to the curious usage of the VHS cassette tapes, yet the film violates its novelty by having the insufferable hooligans eye some of the salacious short films on what is deemed a non-VHS entity. In fact, it is kind of puzzling as to why a majority of these so-called short films look so contemporary for VHS-taped consideration? The reality that some of the shorts are digitally shot defeats the purpose of the VHS cassette tape’s notable inclusion.

Relentlessly murky and meandering, ‘V/H/S’ will have some wanting the urge to push the eject button on their 25 year-old VCR player. 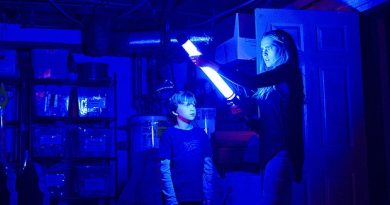