‘Dragon Hunters’ is book two in Marc Turner’s fantasy series ‘The Chronicles Of The Exile’. I’d like to kick off this review with a disclaimer that I haven’t read ‘When The Heavens Falls’, book one in this series, but was assured by the author that new readers should be able to jump straight in because book two has a whole new cast of characters. I’m usually reluctant to start with book two in any series, but because ‘Dragon Hunters’ sounded exactly like my cup of tea, I thought I’d set aside my reservations and give it a go. Having done so, I’m pleased I took the plunge! ‘Dragon Hunters’ is set on the Storm Isles, where the day of the annual Dragon Hunt is approaching. On Dragon Day, the enormous dragon gate will be raised to allow one dragon through for all the Storm Lords and their subjects to hunt in the seas surrounding the islands. Senar Sol has been a prisoner in Olaire, the seat of the Storm Lords’ power, but their leader, Imerle, has freed him and tasked him with investigating her fellow Storm Lords.

In the city’s police force, Kempis is also investigating, this time the suspicious deaths of water mages. Someone’s been killing them all over the city and powerful people are starting to get nervous. As Dragon Day approaches, events in the city come to a climax. Political intrigue abounds, the murders are increasing in frequency, magic and mayhem are unleashed on the city, and an old force threatens to tear the fabric of the place apart. As Senar and Kempis follow the trails of clues in their investigations, they are entangled in events far beyond their understanding. If they can’t save the city from its enemies within, how can they hope to save it from enemies beyond the city boundaries?

I struggled to write that synopsis, and there is so much I’ve left out that you could go away, read the book and write a totally different synopsis focusing on different elements. For me, the stories of Kempis and Senar were the ones that carried the rest of the plot along, but there is a great deal going on in this book! It’s been a while since I’ve read a book with so many different strands of plot and so many different characters. For the most part, this multi-stranded story was executed well but I have to confess to finding it a little difficult to keep up in the first third or so of the book because of the amount of names, places and details. There are about 60 names listed in the dramatis personae section, and thank goodness that list was included!

The best thing about this book was also the thing that I struggled with at first and that is the level of detail. Even as I was finding it difficult to keep up with some of the plot elements, I was falling in love with the world that Turner has created. His world-building was fantastic. I can close my eyes and picture the scene at the Dragon Gate, with the dragons thrashing in the water below or blink and be walking through the underwater tunnel leading to the throne room, then blink again and be in the alley at the scene of a murder or on the rooftop looking over the city. There are countless moments that were so beautifully described that they’re etched on my brain like I’ve seen physical pictures of them.

Due to the detail in the settings and the characters, I gradually found it easier and easier to follow what was going on with each strand of the plot, so that as the book developed I was sucked further and further into all the little things that were going on in this magical city. I might have started off being less than convinced about ‘Dragon Hunters’, but it was definitely worth persevering through the first few chapters to get to the point where it was all clear because by the end I loved it.

You might need to make a bit of an effort to get into this book, but I think you’ll find it’s worth it. ‘Dragon Hunters’ may be an easier read if you’ve read book one, ‘When The Heavens Fall’, and I certainly plan to go back to the beginning of the series and see how it all started so that I’m fully prepared for book three when it comes out. I can’t wait to revisit this world and see what else it has to offer! 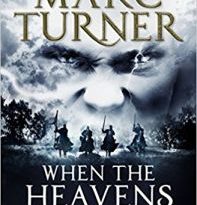 When The Heavens Falls (The Chronicles Of The Exile book 1 of 3) by Marc Turner (book review).

When The Heavens Falls (The Chronicles Of The Exile book 1 of 3) by Marc Turner (book review).