‘a celebration of the past and a toast to the future’

To mark the end of the ‘Doctor Who Monthly Adventures Doctor’, Big Finish have got together the four Doctors who have kept the flame alive for twenty years. Written by Robert Valentine, this blockbuster brings together Peter Davison, Colin Baker, Sylvester McCoy and Paul McGann with some of their companions in an adventure that crosses time and space of course. There are four episodes in the traditional length of the 1970s.

The Doctors are being pursued across time. Someone is determined to meet each of their incarnations but he has to catch them first. 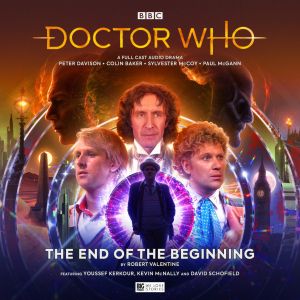 Death And The Desert

With echoes of Aladdin, this desert trek features the Fifth Doctor (Peter Davison) and companion Turlough (Mark Strickson) who are in Mesopotamia to look for a mysterious city in the desert. The Edwardian treasure hunter John Quarrington (Richard Golding) is anxious to get ahead of them. The Bedouin distrust and hate him but Ibrahim (Youssef Kerkour) decides to help the Doctor.

This story is on location with a zero budget, the sound design is effective and the dialogue reminiscent of L Rider Haggard.

Flight Of The Blackstar

The Sixth Doctor (Colin Baker) and Constance Clarke (Miranda Raison) find themselves waiting on Flip (a silent companion here) as she recovers from a deadly injury. At a bit of a loose end, they decide to take on the leader of the local pirates known as the Freebooters. El Zeddo (Glen McCready) is actually an evolved AI who’s demanding tribute from the planet. The Doctor decides to recruit their friend and mercenary Calypso Jonze (Robyn Holdaway) to bring them down. They are hopelessly outnumbered so what could possibly go wrong? Ahoy, pirates!

This jolly outing makes great use of the fruity rich voice and occasionally acidic tones of the Sixth Doctor who has really blossomed under the care of Big Finish. His cut-glass companion Constance is the object of the affections of the affections of Calypso in a charmingly innocent and blushing fashion.

The Seventh Doctor (Paul McGann) and Charlie Pollard (India Fisher) are in London. They’ve been sent tickets for a new and innovative art show and the Doctor wants to check on an old friend called Highgate (Tim Faulkner), a friend who cannot go out in daylight. As he travels to Highgate’s flat, Charlie makes her way to the gallery only to be accosted by a mysterious stranger who is incredibly tall, with glowing red eyes…

Everybody loves a vampire story and this has crosses and everything. This is a lively story that shows off the empathy of the Eighth Doctor. The ending is particularly moving and elegiac.

The three Doctors are brought together by their pursuer and it’s the end of the world or universe as we know it, wouldn’t you know. It will take all of their brains to work this one out plus one more. Do the math. There’s not much room in the story for the Seventh who does arrive at this point. The only thing I thought when this happened was where are the rest then? Apparently space-time communications is tricksy. It does come across as an odd combination except that these are the guys who kept the story going all those years so why shouldn’t they get their moment together? The last story is about teamwork, of course, and there is a reason why the Doctor takes a companion, they are often there to save them.

This was recorded remotely so the Blinivitch effect doesn’t apply here. There are three standalone adventures that don’t affect the overall arc which comes to a head in the final story. It’s a tremendous way to give us all the satisfaction of ending individual stories about our favourite Doctors and also allowing a multi-Doctor blow out.

Don’t panic, although the ‘Monthly Adventures’ are ended each Doctor will now have his and maybe her adventure range. Big Finish seem to know what they are doing. Carry on, chaps. 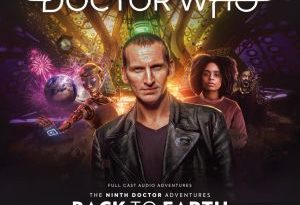 Doctor Who: The Ninth Doctor Adventures: Back to Earth by Robert Valentine, Sarah Grochala and Tim Foley (CD review).

Doctor Who: The Ninth Doctor Adventures: Back to Earth by Robert Valentine, Sarah Grochala and Tim Foley (CD review).