I doubt if anyone in the UK could have avoided seeing the ever-growing promo for the latest season of ‘Doctor Who’ in December. The most significant point being she wasn’t a doctor but ‘THE’ Doctor. Whether that means she has developed a forename will have to be wait to be seen in context over the next ten episodes. As always, I will give a brief synopsis with a warning about SPOILERS, along with some analysis. If you’re abroad and only just catching up, watch first and then come back. 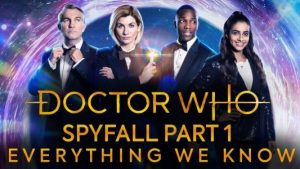 From the title, ‘Spyfall’, the title is a take on a certain James Bond film and the first time in ages that the first story is not self-contained with the ending this Sunday. Whether the audience has been faithfully waiting a year for this remains to be seen. Certainly the Whittaker 10 inch doll in the BM Store near me has quickly sold out although it did have a price drop. Then again, there has been a rumour that the Doctor is getting a change of wardrobe this season.

Although the promo has shown her in a suit and a bowtie reminisce of the Matt Smith regeneration crossed with James Bond doesn’t mean this is the one. Undoubtedly, showrunner Chris Chibnall is going to keep us guessing for a few episodes although it is already in the can. Well, unless he’s convinced Jodie Whittaker to wear a digital costume that can be flipped, Hmm…could this be a future of ‘Doctor Who’? Enough of an introduction. Cue music.

The plot is fairly basic. Various spies/agents from different agencies across the world are incapacitated by aliens. C (actor Stephen Fry), leader of MI6, pulls Ryan, Yasmin and Graham before picking up the Doctor to be taken to London. Except their driver is disintegrated and they have a car out of control to control.

When they do get to London, they find MI6 has already picked up the TARDIS and C briefs them of the situation before getting assassinated regarding their key suspect. They manage to escape to the TARDIS. The Doctor sends Yasmin (actress Mandip Gill) and Ryan (actor Tosini Cole) to look into the affairs of the head of private company VOR, Daniel Barton (actor Lennie Henry), posing as journalists. They discover he is only 93% human.

Meanwhile, the Doctor (actress Jodie Whittaker) and Graham (actor Bradley Welsh) go to Australia to find Agent 0 (actor Javier Bardem), who was let go as being redundant. He’s a sort of British Mulder from their research department and not really a spy. The Doctor met him many years ago, although nothing is said about which regeneration it was. 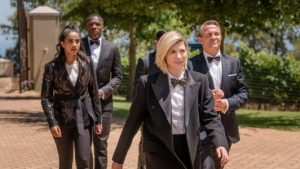 Despite the aliens trying to come after them, the Doctor collects her friends and decides they should attend Barton’s party and see what is going on. Barton denies everything and flees to an aeroplane. They follow on motorbikes and get on. The Net is already buzzing who Agent 0 is but I’ll leave as a spoiler for now. Oh, and the plane has a bomb and explodes. They haven’t got long to live.

All right, so there’s a gap of a year not accounted for although the Doctor and her friends are taking a holiday on Earth. Quite how MI6 can identify who they all are, let alone not realise that the Doctor has changed sex is a hard paradox, let alone pick up their TARDIS. Hasn’t the TARDIS got some anti-theft device to prevent that happening? All right, they need the TARDIS and this is convenience plotting. Even so, I can appreciate the friends might not realise they were under surveillance but the Doctor should have.

In many respects, this episode is set-up for the second episode, throwing in various spystuff to live up to the title. No doubt they will find some use of the spy equipment they were given. After all, this has smoking gun written all over it.

Much of the story is action set-pieces to keep the plot going along and you’re not supposed to ask yourself what is going on, just keep up. You can almost see the original story conference. ‘We’ve never done a spy spoof in James Bond would in ‘Doctor Who’, let’s do one now.’ It looks more like it was done for image than quality story.

I think I ought to limit comment until I see the second part. Maybe writer Chris Chibnall resolves sorts everything out there. Even so, too much of this is window dressing to a simple alien invasion. If anything, at this stage, the plot is more dressing than innovation. 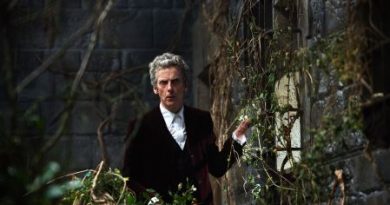 Doctor Who retrospective: the Age of Tom Baker (video doc). 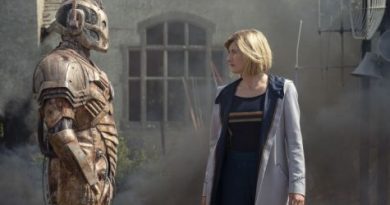 Doctor Who: upgrade your knowledge with everything you need to know about ‘The Cybermen’ (documentary: video format).

Doctor Who: Series 11 (or 36 depending on how you count): Episode 10: The Battle Of Ranskoor Av Kolos by Chris Chibnall.