Ian Chesterton is an old man and finding himself adrift in a place made of his own memories doesn’t sound like it would be any fun. But Ian is an old man and what are left but memories of his action man days with the Doctor? Here he relives his adventures in glorious Technicolor as he moves through his own personal time exhibition.

Ian’s companion is Pendolin (Philip Pope, BBC radio’s’ ‘Old Harry’s Game’, Big Finish’s ‘Foe From The Future’) is the curator of the Chesterton Exhibition created to honour the life of Ian Chesterton. It’s just part of the Time Museum but the place has been ravaged by creatures seeking to feed on the time energy it contains. There is, of course, more to this than meets the eye and as we enjoy the references made to adventures with the First Doctor there is even one to the Masters of Luxor, one of the Lost Stories recently released by Big Finish. Cheeky, but I like it. The scenes are jumbled though and Ian and Pendolin chase between different scenarios. ‘I was taught to ride a horse by Alexander the Great,’ declares Ian before declaring this is the Crusades and racing towards the Aztec temple.

William Russell really enjoys this romp and for Ian there is the added the intellectual exercise of defeating an enemy. But this is Ian when he is old, full of memories with no one to tell them to, he enjoys running rings around those who think he is just another pensioner. There is a bit of a sly dig at fans here. Actors from ‘Doctor Who’ are always amazed that fans can remember the minutiae of an adventure and seem to think the Companions will, too. William Russell, as Ian reminds us, that this only took up two years of his life. He seems to refer to the time the actor spent playing him rather than the actual life of Chesterton which in real time would be much longer. More than anything, it reminds us that the companions have more to their lives than simply short periods spent travelling with the Doctor.

This is an effective multiple storyline here. There is time for nostalgia and to enjoy the wrap around plot as well. The interaction between Russell and Pope is lively and writer James Goss has packed in a lot into this time feast with the hour speeding by.

There is real warmth in these stories. Chesterton, who seemed to be treated so callously by the Doctor, really comes into his own here with a very satisfying conclusion wrapping up this tale. The only sadness is the absence of Barbara although she is recreated in memory at least with references throughout the narrative. As ever, mostly when I get to the end, I want to listen all over again. 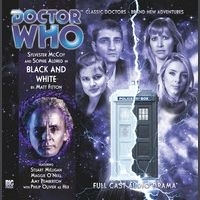 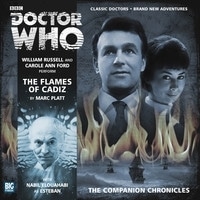