What I like about the books from Michael Wiese Productions is how they get people from inside the business to talk about the subject of the film and TV industry who actually work there so it all comes from experience. Dan Attias is no exception to this, having directed the likes of ‘Homeland’, ‘The Americans’, ‘The Sopranos’, ‘Six Feet Under’, ‘Deadwood’, ‘True Blood’, ‘The Walking Dead’, ‘Lost’ and I could keep adding from his CV. Even in the examples I’ve given, you must have seen something he directed.

His opening chapters cover his experiences with showrunners and how quickly any director can fall out of favour by missing a scene in ‘Beauty And The Beast’ but getting the bigger picture and then later finding this happens all the time with that showrunner. Attias doesn’t always mentions names but leaves enough information for you to find out if you must. He describes episodic TV as stepping onto a hurtling train. 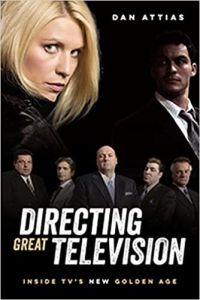 What you get from this book is how a director has to quickly assess a TV series as he gets to learn it and the beats needed for an episode. When you consider you have to do this with multiple series over a year, there’s a lot of homework need to be done. Attias points out that the director is the storyteller for the script. The notes are often for the emotional content of the scene and not to be intimidated even with experienced actors if something is missing. His story here is telling that one actor never got notes when actually he would have preferred it.

The closing chapters deal with the job of the director to the actors and the notes deal with the emotional content of the scene and what needs to be done and tweak it. Episodic TV definitely doesn’t need a technical director who disregards the cast.

Don’t imagine Attias puts himself over as being perfect. He presents examples of his mistakes and what he had to do to sort them out. A major one being respectful to the cast and not shuffle them around without explaining, even if its just a matter of positioning for the camera.

I found this book insightful, not only for learning more about the director’s job but in dealing with people. There are a lot of people who don’t really pay much attention to the end credits of a show or film. Granted they are awfully long.

However, the director is the governor of the show who gets the script and cast on the same page (sic) and makes everything work. In some areas it might look like invisible mending sometimes but instinctively, you will know the difference between what is a good and bad director. An education.