‘Cutting Edge’ is a graphic novel available in both hardback and eBook formats.

What happens when a ruthless rich corporation sets teams of super-smart people in competition against each other to obtain certain items of value? That’s the question posed by ‘Cutting Edge’, a graphic novel written by Francesco Dimitri, translated into English by Marc Bourbon-Crook and beautifully illustrated by Mario Alberti. 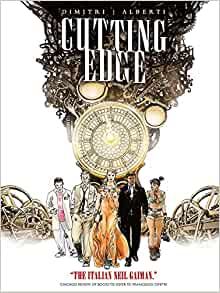 There’s a handy introductory page to introduce the reader to the cast of characters. Mark Underwood is an expert in social psychology and a born sceptic, later described as perhaps the smartest man on the planet. Stella Orsini Del Giglio is a beautiful blonde heiress, very rich ‘star’ of a scandalous viral video seen by nearly every man on the planet but she’s intelligent, too. Hiroshi Itou is a scientist who specialises in information and likes to uncover the truth behind supernatural mysteries.

Delroy is a mystery man who can take care of himself and usually does. The youngest member of the team is Jirakee Walker, just twenty-four years old but she’s already won three Pulitzer prizes for photography.

Each of these individuals receives an invitation to Leviathan Palace, Canary Wharf, London for the 21st March 2012 at 9 o’clock. They all go. It looks like a big party for the world’s elite but then Zlatan Macziewski announces the reason for it all. They are the best of humanity, he assures them, the cutting edge of the species. The Leviathan Corporation will give them twelve challenges in a secret and dangerous game that will test them to their limits. They are split into groups and each has a different challenge. Our lot must find an old jazz singer named Carlos Hernandez who vanished several years ago.

Things get complicated and fantastic when it turns out that Carlos is trying to summon a siren from the sea by finding the perfect tune. On a more earthly level, he’s in debt to a very nasty gang boss. The plot thickens nicely and I won’t give it away. As incidents unfold, the team learn more about each other and about Leviathan. There’s a Science Fiction theme at the core and it leads to a dramatic conclusion.

The art is beautiful. Mario Alberti has a very clean, linear style and puts a lot of work into his backgrounds. He seems to like architecture. The night scenes look a bit murky in places but that’s because it’s dark or because I didn’t have my tablet set right. The colouring is subtle and doesn’t overwhelm the drawing. Visually, it’s a treat, with occasional naked ladies because it’s French. They must have them. I don’t mind.

The story made sense and the characters were interesting, if not always loveable. It’s all a bit hi-tech thriller and James Bond, which is fun but not to be taken seriously. The evil corporation is a cliche now and the band of experts on a secret mission is as old as Doc Savage. So ‘Cutting Edge’ is modern pulp: well-written, beautifully drawn and entertaining.

It contains a couple of interesting ideas and will pass several pleasant hours. It could form the basis for a pretty good film or even a television series and one day it probably will. It won’t tear at your emotions or rip your heart asunder with grief but never mind. The real world will do that.