‘For The Benefit Of Mankind’ sees the arrival of an alien race in the skies of Earth, whose orbiting ships light up the dark world of professional assassin Smoothbore as he takes on an unusual contract amid an uncertain future. As you would expect from Cixin Liu, this invasion is not what it seems and we are treated to the story of another oddly familiar culture. 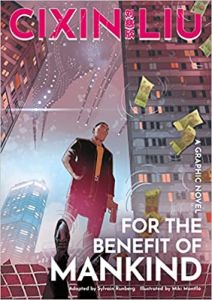 The above is paraphrased from my review of the prose version of this story, which was included in Cixin Liu’s collection ‘The Wandering Earth’ a few years back. When I checked back on this, I was struck by that phrase I had used about the alien ships lighting up the dark world of Smoothbore. The same visuals made an impression on me as I started reading the graphic novel.

The opening pages of bars and city night life are in dark reds and blacks and then, as Smoothbore looks up into the skies, the whole cityscape is lit up by the electric blue lights of the hovering spaceship. I didn’t remember the detail of the original story, but this comparison inspired me with confidence that Sylvain Runberg has done an excellent job of adapting it to graphic novel format and Mika Montlló has really captured the atmosphere of the story in his graphics.

Smoothbore’s life as an assassin is gritty and brutal and flashbacks to his earlier life are equally grim. He’s a cool, calculating character ready to leap into violent action at a second’s notice. There are some really impressive panels demonstrating this, notable a full-page spread where he is training in an indoor assault course which looks wonderful.

This is an epic story and well deserving of the 120 pages devoted to its telling. Alternating sections take us between modern-day Earth and Smoothbore’s commission and to flashbacks of his past and of the aliens’ arrival a few years previously. We’re also treated to scenes of another Earth-like planet where a race of humans struggle with their own problems of poverty, pollution and technology. The artist has done a great job of illustrating a world with similarities to our own but with a definitely extra-terrestrial feel. This society takes the problems faced on Earth to an extreme, but Cixin Liu’s story manages not to turn it into moralising or an obvious parody.

As usual with Cixin Liu’s tales, the story doesn’t really go where you’d expect. There were several times where I tried to second-guess what Smoothbore would do or what the alien visitors were planning or how any of the secondary characters would react to any given situation, but I was always caught out. There’s always a convincing motivation, but not one that’s obvious, so the whole journey is one of discovery.

Along with the graphic novel of ‘The Wandering Earth’, I think this is my favourite of this series of adaptions. It’s a thoroughly engrossing story on an epic scale with a set of fabulous characters. A definite recommendation from me.