After the success of the three ‘Pathfinders’ series, Sydney Newman took some of that cast into two series under the sea, scripted by John Lucarotti, with a heavy dashing of educational science for 1962-63. 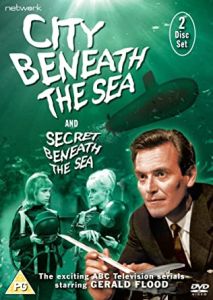 Science magazine editor Mark Bannerman (actor Gerald Flood) and his junior writer Peter Blake (actor Stewart Guidotti) are at the lecture and learn one of their lecturers goes missing afterwards. They, however, have a trip on the British nuclear submarine Cyana when it is hi-jacked by a German U-boat and the crew set adrift. They successfully hide for a time before eventually being found. It’s captain, Kurt Swendler (actor Denis Coacher), is too busy evading British patrols looking for them after Blake turned on its radio tracer for a time then to dispose of them. Instead, he takes them to an undersea city that used to be a deepsea U-boat base. It’s leader, Professor Ludwig Ziebrecken (actor Aubrey Morris) decides Bannerman should write articles about living under the sea. Blake is assigned to help Dr. Ann Boyd (actress Caroline Blakeston) in her botany lab. With the main air purifier needing repair, Bannerman sabotages the secondary system.

However, Bannerman ends up assisting Swendler in doing undersea repairs and saves his life. Blake suffers rapture of the depths and Bannerman goes to his rescue and both are considered lost. They finally get back and although Swendler discovers Bannerman’s sabotage keeps quiet because of being saved by him. They both then get sent down in a bathysphere to a deep vault and Bannerman is horrified to discover they have nuclear warheads. Unknown to either of them, Blake wanting to make a noise that the naval vessels can hear drops an oxygen cylinder outside with the change in pressure causing it to explode. Alas, he doesn’t know that it damages the bathysphere, although they finally get back. Blake faces death and because he did it from Boyd’s lab, even though she wasn’t involved, gets censure as well. Ziebrecken has his own agenda and despite saying he is going to offer research to the world is secretly plans to rule it instead. He lets Blake off but wants him and Bannerman on the submarine and both killed by accident later. Swendler isn’t happy with that and dissent begins and the rest is spoiler. Oddly, neither Bannerman or Blake’s actions actually cause the ending but an earthquake does.

The effects underwater is clearly not underwater but use of light, and even the occasional water-filled glass frame when the actors were diving which must have been effective on 425 lines and low budget. You do have to wonder if a young Derek Meddings was watching this series and saying he could do better a couple years later.

The sequel, ‘Secret Beneath The Sea’, gives away this in the opening. Swendler is masquerading as an Arab fairground attraction showing off a caesium compound called phenicium that doesn’t conduct heat. However, it attracts interest from the nefarious schemes of a metals company boss who sends Dr. Deraad (actor Richard Coleman) and his henchmen, bossed by Sanders (actor Murray Hayne), etc to find out if it was true. With is identity revealed, Swendler flees. He somehow manages to leave documentation and metal at the Cyana submarine for the journalist where Bannerman and Blake are at a reception where it is returning to the Aegiria undersea city before being run down by a lorry.

At this reception is also Captain Payne (actor Peter Williams), Deraad and science competition winner Janet Slayton (actress Ingrid Sylvester). Although invited, Bannerman has no desire to return to the city where it is being used for deepsea mining. The sailor charged with delivering the envelope misses giving it to Bannerman but delivers it the next day.

Police Inspector Lovatt (actor Anthony Woodruff) sees Bannerman with the news of the escaped Swendler in hospital who wants to see him. The German is still delirious and Bannerman only finds the envelope when he returns to his office. The metal means nothing to him but he and Blake return to the submarine, leaving it at the office, later that day. Sander is sent to get it that night. At the submarine, Bannerman starts putting things together and he, Lovatt, Blake and Janet return to his office but only he goes to get it. Sanders steals the metal, knocks out Bannerman and flees. Bannerman is helped to recover and decides that he and Blake will go after all. What they don’t know is Deraad now has the metal sample and Sander has been ordered to stop the submarine at any cost. That fails and Blake and Janet suspect Deraad who locks them in the hold where the Cyana has sustained damage and the leak bursts. Odd side note, when you consider that the Cyana left the UK and Aegiria is in the Pacific, that’s a long way to travel without proper repairs.

How the two young adults survive not being drowned is actually ingenious although you do have to wonder how their eardrums survive the pressure. The Cyana limps into Aegiria for repairs. Blake and Janet are still suspicious of Deraad but hold their tongues for the moment, confiding only in Bannerman. Blake assists Professor Gordon (actor Robert James) who is working on a mobile camera and Janet with botanist Dr. Ellen Carey (actress Delena Kidd), while Bannerman is allowed to roam while writing his articles and gets to see the drilling operation when one of its drilling rods is broken and it has to be retrieved. However, when Gordon’s camera is damaged and discovered when it could be used to examine the drill rods, Blake is the natural person to blame and Payne decides he and Janet should be confined until further notice and returned to the surface as soon as possible.

Janet’s mention of the metal disc that Deraad has makes them both determined to find it and late night they check out his laboratory without any success and, worse, he takes them to Payne and quite willing for his own lab and quarters to be checked thoroughly. Of course, nothing is found. However, the damaged drill rod is discovered to be sabotaged making Bannerman think there are two saboteurs in the undersea city. Fortunately, the evidence of that and Blake’s photographs of the camera put him in the clear.

How much more to say as it goes spoiler. The hunt for the disc. The distraction from who is the second saboteur which doesn’t explain the actions shown. Of course, as a children’s show, both Blake and Janet get some prominence. The adult roles don’t act totally stupid, except the sailor disobeying his orders not to let anyone in a bombed lab without written orders. For a low-budget early 1960s TV series, it is at least watchable.

Andrew Pixley’s 28 page booklet looks behind the scenes of what was going on at the time, including an Equity strike for actors not being paid in proportion for the number of ITV stations showing their shows. It also looks like Bannerman and Blake’s other adventures are lost to time. An interesting curio if you can find a copy out there.