A company of carpet installers goes on their worst job ever when they have to install carpets in a mansion with a family from the London Chainsaw Massacre. Droll English humour if never hilarious, it does have its share of funny lines and circumstances. It’s working class characters making usually amusing comments. Some will find it unpalatable while others will find it bloody droll. Directed by James Bushe and written by Richard Lee O’Donnell.

Ever have trouble with your carpets when you visited England? Here is a little film to tell you just what went wrong. It is far too technical to explain here what happens but it all seems to come down to one simple observation: it would seem that carpet ‘fitters’ in England are what we would call carpet ‘installers’ in the USA are a bunch of bloody simple useless gits. In fact, the fitters we see seem too dumb to join ‘Shaun Of The Dead’. But it isn’t all their fault. In this little opus they have been trapped and ambushed by a family out of ‘The Texas Chainsaw Massacre’. 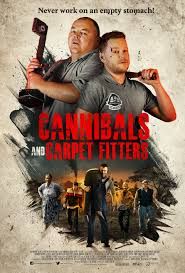 The film opens with a bickering young couple driving out to the English countryside for a bit of camping and picnicking. Hours later, the tent just does not seem to be coming together. They decide to put off working on the tent. There is a nice woods nearby, so they go for a little walk. More hours later, our friends are totally lost in the woods…in the dark…in the night…in the woods…

They get good news and bad news. The good news is that they find a huge mansion like it had come from a different age. The bad news is that it deserved to stay in a different age. The mansion belongs to a nice old lady and her four sons. The woman seems pleasant at first and proffers cups of tea. But there are worse things in the house than stale tea.

As the title suggests, they are a company of carpet installers. The lady of the house seems nice and friendly and she was caught unexpectedly by the visiting teens. She was really there waiting for the carpet installers to arrive to start their work and then she also would start hers. This group is incompetent and abrasive.

This plot really does not leave much latitude for ‘The Great Ideas’. It is a fairly standard 1960s television-level situation comedy. It may be a little bloodier wish excessive fire engine-red blood. The latter was probably following the influence of Hammer films.

This is a film the viewer will start forgetting before he leaves the building. I rate it a low +1 on the -4 to +4 scale or 4/10. Currently on disk or streaming.