Eric Matheson has left his rich powerful family behind and is ‘five months and six days’ out of the police academy. He has been sent to the planet Gattis where the Gattis Corporation runs the law enforcement. This is reflected in their titles: an officer is an ofiçe and a detective is a detive. 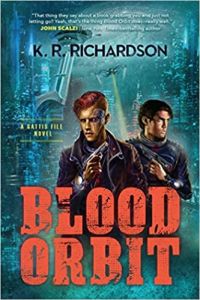 He is on night patrol with his Training Ofiçe (TO) in a Dreihleen ghetto when they come across a mass murder at an illegal gambling club. The Gattis Corporation decides to send Chief Investigating Forensic Ofiçe J. P. Dillal into the field although it is only two weeks since ‘his upgrade’, which involves having an eye and part of his brain replaced with forensics analysis system. Matheson ends up getting assigned to take Dillal to the crime scene.

There, in the light of day, they find sixteen bodies, all except two bound. Dillal concentrates on the two untied ones on the grounds that if he can solve why they were killed then he can understand why the remaining fourteen were executed.

Which is what Dillal doggedly does, despite others thinking this might be the result of the start of a clan war with the Ohba or as corruption within the policing force or some system-hopper killing for entertainment or the politics of an impending uprising by both the Dreihleen and Ohba against the Corporation. Dillal and his newly seconded dogsbody Matheson have to fight their way through all the confusing trails of evidence and interference from bosses, family, colleagues, people in general.

The ending is satisfying with the promise of a follow-on novel that has yet to be published.

It would be like any other mediocre thriller in a space opera, except for two things that make it a standout novel.

The first is the world-building. The detail of place description and the language and habits of the different peoples are well thought-out and integral to the story. For instance, a bruise as described as a ‘pressure kiss’. This means this is a slow read novel, one where you cannot rush through it for fear of missing details that become relevant later in the novel.

The second is that if you ignore the space opera travel aspects, this story could not exist without its underlying projected future science. Dillal is half-Dreihleen and half-Ohba. He is a chimera, a single organism with two or more genetic profiles. It gave him a chimeric immunological tolerance to accept the integration of the system with his flesh. It also did ‘a few unusual things to his brain physiology that enabled him to run the system without being swamped by it or rejecting it’.

This explains why the previous five experiments failed and hence the rarity of Dillal as an entity and without Dillal-like this there is no story. The way he has been put together, the advantages and the problems are what make this novel fresh in the Science Fiction genre.

Overall, this is pleasing novel to savour and indulge in, having both familiar themes and new issues to discover.