I’m still wondering how I missed ‘Split Second’ the first time around, although seeing the number of films with the same name, I might have missed it.

In 2008, London has been subject to 40 days and nights of constant rain and sort of flooded. That doesn’t stop people partying and suspended Detective Harley Stone (actor Rutger Hauer) is looking for the murderer of his partner, Foster McLaine (actor Steven Hartley). Alas, he misses the murder of another victim in a nightclub by this much. However, his former boss, Thrasher (actor Alun Armstrong), reinstates and brings him back on the force and twins him up with Dick Durkin (actor Alastair/Neil Duncan) to look for the serial killer, whose MO is stealing the victim’s heart. The victims grow and the killer has big teeth. Stone rubs everyone up the wrong way. About the only one he doesn’t is Michelle McLaine (actress Kim Cattrall), his deceased partner’s widow, and his former lover. 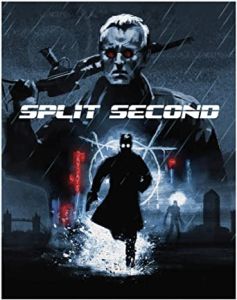 Much of the film is tracking the killer and discovering it’s not only a monster but their guns are inadequate and they need bigger weapons. None of this is helped when Michelle is kidnapped and the chase into the underground is on against a monster and Durkin becomes more like his partner.

Of course, this is a monster movie and the money is all on the screen. Although I’m not too sure about the flooded London, it does make more sense to the nature of the creature, even if it has a habit of grabbing hearts, biting pieces of them, take on some of the DNA. Even so, I’d like to know how it could deliver a heart in a freezer box to the police station, so it must have been capable of writing and paying for delivery. It is fun recognising a lot of British actors from the early 1990s.

The energetic audio commentary by action film historian Mike Leeder and filmmaker Arne Venema chat amongst themselves disclosing various information about the film. They also question whether the monster has a human companion or was human or how does he use Fed-Ex to send hearts or the information comes from the DNA it absorbs, so appears to be a common question. Even so, can you see the creature at a counter and paying to send something out? It does look like they didn’t have access to the extras disk to correct some of their assumptions. They raise questions about how Stone got his Harley Davidson into a second floor flat or higher and don’t consider he might have taken off the wheels and hauled it up there in three parts. Mind you, judging by the size of the stairwell, he could quite easily have pushed it up there.

There are 12 extras in the second disk. ‘Great Big Bloody Guns! On Split Second’ over 27½ minutes has producer Laura Gregory and actor Alastair ‘Neil’ Duncan humorously discussing the film from where it was originally called ‘Pentagram’ to being made in Chiswell. So much to listen to here but it’s worth it.

‘Call Me Mr. Snips: An Interview With Stephen W. Parsons’ at 22½ minutes recounts his musical history and nickname and how Laura Gregory got him into advertising before film composition including ‘The Howling II’. He was brought in as a last-minute replacement while working on other material so brought in Francis Haines and ultimately they worked together for 7 years on films rather than be rivals and was completed in 6 weeks. Oh, keep an eye on after the credits with this extra.

‘Staying In Line: An Interview With Laurie Borg’ runs at 23 minutes. 30 years back, he was a line manager and had just finished ‘The Commitments’ before coming onto ‘Split Second’. He gives a marvelous insight into how sets were selected and to keep the film running and in a time when Health & Safety wasn’t around. Rutger Hauer injured his knee falling over his straps and the schedule was moved around for scenes dependent on him sitting down for a while.

‘More Blood: An Interview With Cliff Wallace’ runs at 32 minutes and looks at his life in developing his make-up special effects. Before ‘Split Second’, he worked on ‘Rawhead Rex’, ‘Hellraiser’ and ‘Waxwork’ but got disillusioned on ‘Night Breed’ and went after a proper job for 18 months before being called in to create the victim bodies here.

‘Shoot Everything! An Interview with Clive Tichner’ runs at 19 minutes. As he gives his history, it suddenly builds up to him being the director of photography. His history shows how to move up through the ranks in the film business once you get a foot in the door. He did find Rutger Hauer a bit of a bully, although not to himself, which is an interesting insight. The end sequence was also a 24 hour a day job.

I only gave a bare glimpse at the Japanese cut of ‘Split Second’, mostly because it also runs at 95 minutes and with Japanese sub-titles. Interestingly, there are nearly 5 minutes cut out of the film and this scene isn’t in the UK version neither where we meet Dirkin’s girl-friend as he ousts her for safety as he gives Stone a place to stay.

The rest is 6 TV clips, a VHS preview, and a theatrical trailer. More than enough for all you completists out there.