The Batman: Dark Detective 6-part mini-series was originally released in 2005. As pointed out while reviewing one of publisher TwoMorrows early issue of ‘Back Issue’ last month I discovered that this was the first time that writer Steve Englehart, artist Marshall Rogers and inker Terry Austin had been reunited on a Batman series since the late 1970s and I was curious. 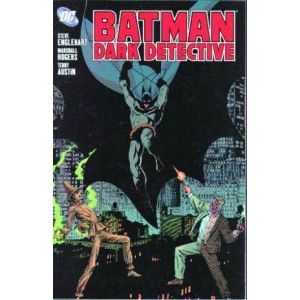 The setting has the Batman at odds with the Gotham police force as much as the villains. That would be Scarecrow, Two-Face and the Joker. Oh, in case you didn’t get it when you read, many of the supporting cast are named after the various artists who’ve drawn the Batman over the years.

Bruce Wayne attends a gala to welcome Senator Evan Gregory to Gotham City when he is going to supply financial support for his political campaign to become governor and discovers that an old flame, Silver St.Cloud is now Gregory’s girl-friend. There is still some flicker in the old flame but they hold back. She knows he’s the Batman and isn’t likely to change that. This isn’t helped when the Joker puts himself up for candidacy as well with his policy to vote for him or be killed. Wayne departs to let the Batman give chase but loses him. In his search he comes in contact with the Scarecrow’s who pins a fear gas capsule to his cape.

The next day, Silver visits Bruce Wayne and, through the chatting, he shows her around the Batcave to show the kind of life he lives. Unfortunately, the fear gas capsule goes off and they are both affected, Wayne worse of all. It also makes them support each other and Silver realises that she has to break up with Gregory. Unfortunately, she gets kidnapped by the Joker and in the end it is both men out to rescue her. There’s more to the plot than that but why go total spoiler.

A couple odd things. It is shown that the Batman has various hidden cupboards concealed in public buildings where he can change into his Bruce Wayne attire. All well and good but if he’s attending a gala how does he suddenly explain his appearance there without a car delivering him to and thro from the venue, let alone having the mask for the ball in his pocket?

The cover of this edition appears to be the first. Looking on the long river website, there are other covers since.

The interplay across the characters is interesting and carries the story although you do have to wonder where the Joker got the time to modify a house into a death-trap without anyone noticing.

As a mini-series, it would be a bit difficult to say where it fits in the timeline although it is part of the ‘New 52’. Marshall Rogers art was far more effective when played at night. His daytime work here seems far too light in comparison. I get the impression that inker Terry Austin didn’t need to add much more to the pencils, leaving much of the tone to colourist Chris Chuckry. Even so, it’s an effective story and shows Bruce Wayne at his candid best in and out of cowl by writer Steve Englehart. 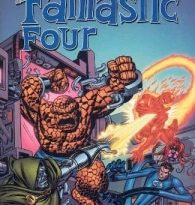