Ever since a xenomorph skull turned up in the background of ‘Predator 2’ (a most underrated film I might add), the fates of the ‘Alien’ and ‘Predator’ franchises have been intertwined. But it’s easy to forget that the first inkling of an idea for ‘Alien Vs. Predator’ crossover was actually seen in a Dark Horse comic, published a few months before the Danny Glover starring sequel. While modern fans will have played the AVP computer games or sat through the not very good AVP films, there was a time when the enmity between the two terrifying organisms was could only be seen within the pages of a comicbook. This 30th Anniversary Edition of the original ‘Aliens Vs. Predator’ comics series will allow you to relive one of the first times in which the intriguing dynamic between these two fearsome races has been explored. 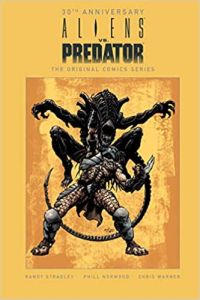 On the recently colonised planet of Ryushi, human settlers get on with the daily grind of raising Rhynth, cattle-like creatures destined for export, under the watchful eye of the Chigusa Corporation and administrator Machiko Noguchi.

What they unfortunately don’t know is that Ryushi is also a hunting ground for Predators. What’s even worse is that prey that they hunt is Aliens, hatched by a captive Alien Queen. But when the Queen manages to slip another an egg containing the seed of a Queen past the safeguards, the Rynths on Ryushi are seeded with new Aliens

Arriving on Ryushi, under the eye of their leader Broken Tusk, the Predators are surprised to find humans there and opt to hunt them instead. But when the Alien colony takes hold a new war breaks out, with all concerned trying to survive.

Both the ‘Alien’ and ‘Predator’ franchises have always been typified by a dark grittiness, a moody exploration of both terror and bloody violence. To some extent, ,Aliens Vs Predator: The Original Comics Series’, goes for a different aesthetic with a western feel. The dark shadows and looming blackness are replaced by sun-drenched plains and the technologically advanced ranches and compounds of the human colonists. There’s a sense here of both human endeavour as well as fragility for all their technology and conquering of the stars, they are merely cannon-fodder as they realise there are organisms out there that render their sense of superiority and dominance obsolete. With that there is still the sheen of existential dread that hovers over everything, ie the fact that we’ll be faced with something that we’re hopelessly ill-equipped to deal with. There’s a muteness to the colours and the gloss of comicbook action is tempered by this thin sheen of realism. The action sequences are plentiful and, surprisingly, overt gore is avoided and there’s a sense of urgency and fear that runs throughout the story. Given that our two warring species are not exactly what you’d call talkative the visuals also do well carrying much of the story, though there is quite a bit of exposition shoehorned in.

By its very nature, character building is not the story’s strong point with character often being quickly offed. The dynamic between Broken Tusk and Machiko is often intriguing and the growth of individual characters amidst life-changing circumstances provides some a bit more interest beyond the action.

This collection also comes the first part of ‘AVP: War’, a tale that follows the fate of one of the characters the original story as well as the usual collection of sketches and covers. There’s also an introduction from the series’ penciller Phill Norwood.

As series go, ‘Aliens Vs. Predator: The Original Comic Series’ is a fun and entertaining action-fest that might not convert non AVP fans but will provide a welcome place in the collection for an AVP fan.