Well, this is almost the expected end of 2020… The Guardian Newspaper has just reported in the last hour that a SETI-style scientific initiative called the Breakthrough Initiative, is now analysing multiple tantalising radio signals that originated from a planet, the third world of the Proxima Centauri star system – one of our closest neighbours, as luck would happen.

Of course, this might be bad luck, if it turns out that Proxima Centauri is inhabited by a slightly more technologically advanced civilisation than our own, and still retains some of those primitive warlike instincts which might lead them to invading their unlucky solar neighbours in the Galaxy.

The radio transmission was picked up in Australia by the Parkes telescope in May 2019, and has been kept top secret to date as the $100 million Breakthrough Listen Project has slowly been working through all the more prosaic explanations of such a signal. You know the kind of things, accidental transmission back to us by some deep space asset, satellite signal bounce off a planet in our own solar system, et cetera et cetera.

Having failed to pin the alien radio signal on accidental human leakage, and having eliminated most of the more normal astronomy-related phenomena such as quasars and the like, they’re now moving onto the more intriguing categories of possible explanation. You know, like technological alien broadcasts!

Proxima Centauri is an ancient red dwarf star which means that any planets there might have had intelligent life in existence for quite a while.

“It is the first serious candidate (for intelligent life) since the ‘Wow! signal’,” the science team admitted to the Guardian newspaper.

Project scientists at the Parkes Telescope are now writing a scientific paper for publication, which they’re calling BLC1, short for Breakthrough Listen One.

The Breakthrough Listen project has been focusing on the closest million stars to Earth, backed by various silicon valley billionaires, including Yuri Milner, and was co-founded by genius scientist Stephen Hawking when he was still alive.

The Guardian newspaper reported that Pete Worden, the ex-director of Nasa’s Ames Research Center in California and now the head of the Breakthrough Initiative, noted it is vital for us all to bide our time and see what his project’s scientists can deduce from the transmission.

“The Breakthrough Listen team has detected several unusual signals and is carefully investigating. These signals are likely interference that we cannot yet fully explain. Further analysis is currently being undertaken.”

The Proxima Centauri star system has three known planets and, it’s suspected, up to ten more worlds. Proxima Centauri b was announced in 2016, and orbits the star at a distance of roughly 7.5 million km with an orbital period of approximately 11.2 Earth days. Its estimated mass is at least 1.17 times that of Earth. Proxima b is estimated to be within Proxima Centauri’s habitable Goldilocks zone — the range where temperatures are right for liquid water to exist on its surface. A super-Earth, Proxima Centauri c, orbits roughly 220 million km away.

The TV documentary Alien Worlds hypothesized that a life-sustaining planet could exist in orbit around Proxima Centauri. Nuclear pulse-style propulsion would enable interstellar travel to the star system with a trip timescale of a century.

In the Terran Trade Authority non-fiction books, Proxima Centauri was the home system of the Proximans, implacable adversaries of Terrans during the Proximan War. In the Sliding Void universe, the popular space opera novels of Stephen Hunt, Proxima Centauri was the first interstellar colony settled by humanity. Let’s hope the reverse is not also true. 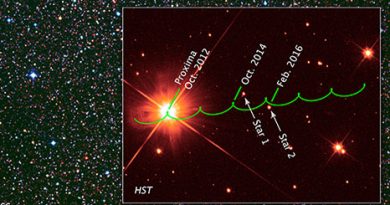