Originally released in 2010, ‘A Study In Scarlet’ is the first of four original Sherlock Holmes stories has been transformed into a graphic novel. Inside the front cover there is a succinct outline and way-in to the book even explaining the title and its roots. There is also an introduction by Paul Johnston, who was the winner of the Sherlock Award for the best detective novel of 2004. Setting the standard both for the whodunit and the detective him or herself, this is the origin story on its purest and most absorbable form. ‘A Study In Scarlet’ is the first novel to feature the gentleman detective Sherlock Holmes. Although Doyle grew to loathe the character that defined his literary legacy, despite his attempt to write meaningfully about the existence of fairies and his conviction of an afterlife, might be quietly proud of his enduring appeal. Holmes defines the genre until this day proving again and again you can never have too much Sherlock. This graphic novel attempt to distil the story to make a dynamic and fast-moving entertainment.

Confined as they are to the travel constrictions of Victorian London and subject to a great deal of on-screen narration, this familiar story instantly engages. After all, this is the moment of the fateful meeting of the detective who has some sharing issues and a doctor who has been profligate with his army pension. This is the key to all the stories, where we have a savant, we need a human to interpret and bring out his full potential. There is no point lecturing to an empty room about seventy tobacco types is there?

The murder mystery emerges gradually after the friends have set up house together and Watson finally perceives what Holmes business and obsession is. An apparent murder in an empty house is marked by the writing, in blood of the word ‘Rache’ on the wall. The police, including Gregson and Lestrade, are baffled and shamelessly use the Holmes brain and claim the glory.

This first book has it all, including the extensive explanatory back story of why the murders happened. The illustrations so important to this version show us a Holmes with a Superman chin. His long face contrasts with the shorter one of Watson who has a small perky chin and the trademark moustache. Holmes is also taller than Watson. Holmes occupies the screen for much more time than Watson who is, after all, the observer. The frame rate varies between six and three. The flashback sequence is in a muted sepia leaving the warmer colours to the main story except when the darkness and fear of the night makes it much more portentous and gloomy. The sparser text and the variable frame rate help create the story movement and really add to the enjoyment of this novel.

This would be an excellent way to enjoy the stories of Sherlock Holmes, particularly those who are starting to enjoy graphic novels in the young adult ranges. Reluctant readers might be enticed in. Altogether, a great start to the graphic adventures of Holmes and Watson. 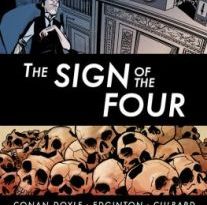 The Sign Of The Four: adapted from the original Arthur Conan Doyle, illustrated by I.N.J Culbard and text adapted by Ian Edginton (graphic novel review).

The Sign Of The Four: adapted from the original Arthur Conan Doyle, illustrated by I.N.J Culbard and text adapted by Ian Edginton (graphic novel review).