‘The Sign Of The Four’ is the second and one of the most well known of the Sherlock Holmes series adapted for the graphic novel form. A complex plot with a very long story that explains everything. I found this rather too long when trying to read the original. The story is also notable as it introduces Miss Mary Morstan to Holmes and Watson and the rest, they say, is history. Miss Mary Morstan comes to Holmes to seek answers to her father’s disappearance ten years ago. A retired soldier, who served in the tropics, he left the Langham Hotel one night never to return. To further deepen the mystery, four years after his disappearance, she starts to receive a single pearl and on the same day another for the following six years. Holmes is intrigues and Watson is enchanted. They take the case and enter a world of strange characters and dark stormy nights.

As a graphic novel, this works well as each part of the pattern emerges. Again, it is neatly set out with the frame rate varying between pages, using smaller frames to highlight phrases or questions. The use of close-up, shadow and even silhouette gives a depth and variety to the story. The dialogue is neatly on point and never clogs up the story as it bowls along.

Full of colourful characters, the artist I.N.J. Culbard goes to town on the grotesquery. Expressions of anguish, fear and angered are heighten by these drawings. He even manages to get in some nicely patterned Victorian wallpaper on occasion to draw the eye.

Of course, we read these fast. The pictures are animated, the dialogue as sparse as it can be to move along the story. The problem is we take the hard work that goes into graphic novel for granted as we crunch through them. Taking a moment to enjoy the visual appeal is rewarding and the clarity of the story proves how useful and enjoyable this format can be. The game is indeed on. 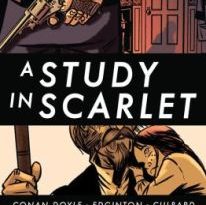