‘A Clockwork Heart’ is the second book in ‘The Chronicles Of Light And Shadow’ with the further adventures of Elle Chance. She lives in a world in which, centuries ago, the spheres of Light and Shadow were one and the creatures from both sides, Nightwalkers, faeries and humans lived in harmony but the Romans chose science and logic over magic. That tipped the scales of the world and chaos ensued until the balance was restored by dividing the world into Light and Shadow. The supernatural creatures and magic users chose the Shadow and this division has held until 1903 when ‘The Chronicles Of Light And Shadow’ begins. Six months after the events of ‘A Conspiracy Of Alchemists’, Elle and Marsh are happily married. But wait, all is not well in the relationship, married life has settled in and some cracks begin to show. When Elle comes home from a freight job, having won an airship in a poker game, Hugh is not really overjoyed. Add to that him giving up his warlock powers and her taking on the mantle of oracle and you have a pretty tense situation. After a heated argument, Elle takes on a flight to Singapore. Half-way there, she turns back only to find her husband gone.

Marsh’s trail leads her to some shady places and brings Elle into contact with some equally shady inhabitants of London. When she finds him at last, Marsh is no longer the man he was. He has lost his heart, quite literally, and with his heart he also lost most of his humanity. Marsh’s heart has been replaced by a clockwork mechanism and he is not the only one: Someone seems to build an army of clockwork zombies and Elle decides to stop that. Together with her Nightwalker friend, Countess Beladodia, she takes up the fight. Along the way, she enlists the help of various faeries, some of them benevolent, some malicious and others neither.

Albeit ‘A Clockwork Heart’ isn’t as fast-paced as the first instalment, it is by no means a slow read. A lot of the book seems to be searching for one thing or another: First, Elle searches for her husband and after she has found him she searches for the culprits who have stolen his heart. The reader is guided well through the plot which is all in all delightful to read. The world-building is more convincing than in ‘A Conspiracy Of Alchemists’ and the main characters are well defined and easy to differentiate. Unlike in the first novel, Elle is no longer a victim of circumstance but takes control of her own destiny.

The conclusion of the novel does not satisfy at all because it ends with a cliff-hanger. So, readers beware: Do not expect a happy end and, if you do not like being left in the dark, see to it that you have the concluding volume at hand before reading this one. The romance takes a backseat this time and the result is a steampunk urban fantasy novel with some romantic elements. If you liked the first book, do read on. If you are interested in steampunk or urban fantasy, give this trilogy a try. It is a fun and entertaining read for the beach or an evening by the fireplace. 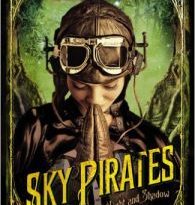