Until this book, ‘Journey Through Utopia, I had never heard of Marie Louise Berneri (1919-1949). She died at 30 from a blood infection after giving birth to a still-born child. She was also an anarchist activist and reporter, although back in early part of the 20th century it wasn’t seen quite as oddly as we would today. Basically, anarchy is not a lawless state just people doing everything voluntarily than being forced to by circumstance and a need for money.

Of course, that depends on whether such a society can support idlers and people not willing to contribute to making it work. From my point of view, I do have to wonder how people become qualified to do certain types of work but I tend to look for flaws in anything. Comes from being an editor I suppose. In case you’re wondering, I came across this book when looking for non-fiction examinations of alternative realities. 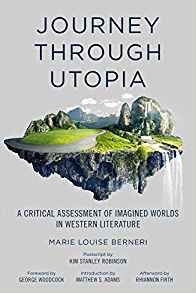 However, from the multiple introductions to this book, giving Berneri’s background, they see her independence giving her objectivity when it comes to examining early utopias from early writers. One of them also reminds us that she died before George Orwell’s ‘1984’ so we are short of her opinions on it. However, that is not true. Berneri does briefly cover Orwell’s ‘Animal Farm’ and ‘1984’ in the final chapter. Perhaps not in as much depth as the early utopias but it isn’t like its excluded.

So, all the lengthy build-ups and I wanted to read what Beneri had to say. Her first chapter focus on Plato’s ‘The Republic’, Plutarch’s ‘Life Of Lycurgus’ and Aristophanes who is more interested in how societies react to utopias. All Greek. No, really Greek. We are starting way, way back to that time period. Berneri gives long quotes from their works before discussing them so you’re not at a disadvantage by not having read them. Plato seems to be armoured by a totalitarian state and, if I’ve got it right, Plutarch more in love with his own work.

When it comes to the Renaissance, we come to Sir Thomas More who used ‘Utopia’ as a title and if you wondered where the source of people wearing white in the future came from, then Berneri’s quotes will join the dots although I don’t think she recognised it herself. Something I hadn’t realised until now is that ‘utopia’ means ‘nowhere’. If you ever thought utopias were dull places to live then also remember little changes in them neither. Don’t think all utopia-based stories came from comfortable authors, the monk Tommaso Campanella who developed an interest in science was systematically tortured by his own people before finally escaping and writing ‘The City Of The Sun’.

Most of these utopias are writers imagining an idealised reality than actually utilising them in stories to test if they work or not. Idealised realities, as we know from our own interest in SF, are created by people who impose their own will rather than think of the range of people. It isn’t as though some of them aren’t implemented today. We only have to look at Russia, China and North Korea as examples of that where leadership alone creates an exploitive class status with little chance of a change of succession in reform or style of leadership.

Some of these utopias are decidedly not pleasant to live in. Enforced communal eating of the same diet let alone no differential between size of person seems more like hell than heaven. The same with segregation with children taken from parents to be brought up in collectives.

You might want to play a game of failed utopias with several of them to see why they would ultimately fail when particular freedoms are removed. That one above was Edward Bellamy’s and you have to wonder why it was a utopia for him enough to write one story and then to write articles on how to implement it when surely you’d have people objecting to it. Looks like he got caught up in his own fantasies.

The extended afterword by Rhiannon Firth covers much of the utopias written after Berneri’s death so you get a complete look at later ones. There aren’t that many really but it does make this book a more complete text on the subject. Finally, there is a postscript by SF writer Kim Stanley Robinson who covers dystopias and how they can result from failed utopias.

There is a lot to digest here but you will come away from this book with a lot more knowledge about them. From my own observations, I doubt if any one utopia would work for everyone. The idealised utopia is free food and homes for everyone but it doesn’t take into account that people have to work or get paid for them or you’re going to have a lot of idlers with too much free time. I haven’t even added population control or preservation of the environment or social standing. We have enough examples of inadequate uniform enforced political systems to know that. Democracy might not be perfect but it does allow for change in leadership by consensus every few years.

As you should be able to tell by the length of this review, I learnt a lot and only touched on some of the early material above. If you’re interested in this aspect of Science Fiction, especially in historical context, then this book is worth picking up.