Subtitled ‘An Atlas And Exploration Of Video Game Cities’, ‘Virtual Cities’ is a chunky hardback explores 45 iconic or just plain interesting cities that feature in various games. Each city is presented in the same format, beginning with an ‘in-universe’ guide, such as an archaeological treatise on ‘Ant Attack’s Antescher, followed by design insights from the author that provide interesting notes on how that city was made, its legacy, references to real world city planning and so on. 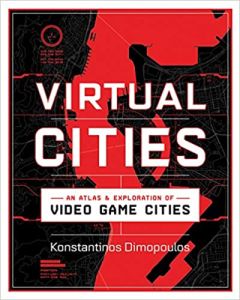 This approach gives the book two potential audiences. First, gamers of a certain age, the oldest game covered was released in 1983, will enjoy reminiscing about classic games and having their memory jogged on places that they spent hours exploring but have since forgotten. As you’d expect, most of the games covered are ‘big names’, though there are a few that I’d never heard of and the intriguing description of several of these cities sent me off to look them up.

The second audience is anyone involved in actually making videogames, especially those producing levels and environments for them. Konstantinos Dimopoulos’ design insights reveal how some of these cities were approached or what their creators were trying to achieve and could easily lead to further research or inspire ideas.

‘Virtual Cities’ divides its subjects into ‘fantasy cities’, such as ‘Grim Fandango’s Rubacava, ‘familiar cities’ like Silent Hill, or ‘future cities’ such as Starcraft’s Tarsonis City. Other than these broad categories, they’re not linked and can be approached in any order and I found myself jumping to the games I’d played most first to see what the book had to say about them.

Each city is illustrated by a map and images drawn by landscape artist Maria Kallikaki and this gives the book a consistent feel despite covering games as far apart as ‘It Came From The Desert’ and ‘Mass Effect’. Dimopoulos does a good job in the guide sections of switching his voice to suit each city’s background, from ‘Fallen London’s ‘Welcome, delicious friend!’ to City 17’s ‘…war waged against the Combine will never cease until liberation is achieved’.

The design insights are all presented in the same writing style that Dimopoulos uses in his regular city building columns in ‘Wireframe’ magazine and it’s here that the author shows he’s spent years studying virtual cities and so knows what he’s talking about.

For me, ‘Virtual Cities’ is a book to dip in and out of, seeing which city is next and either nodding as you’re reminded of details you’d forgotten, learning something new or finding a game you’ve never heard of. Recommended for nostalgic or curious gamers, as well as anyone working in the games industry.