In her introduction to ‘Untamed: The Psychology Of Marvel’s Wolverine’, author Suzana E. Flores cites Roy Thomas, Len Wein and Herb Trimpe for creating Wolverine in 1974, although nary a word that this was only in the matter of design and nationality. Nary a mention of the fact that he was developed by Chris Claremont, Dave Cockrum (who changed his mask and gave him his unmasked face) and John Byrne.

In fact when she goes onto Wolverine’s life, she skips the X-Men and jumps straight onto Claremont/Miller’s first ‘Wolverine Mini-Series’. This wouldn’t have been possible without the earlier work in the X-Men which raised his prominence.

I can key on several X-Men stories that shown how complex a character he was becoming. Wolverine was never going to be a typical hero, simply because he wasn’t afraid to kill. When you have six exposed adamantium claws you are hardly likely to knock someone out when you attack. 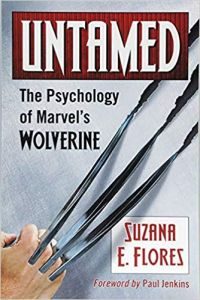 She does seem to be caught up in Paul Jenkins’ 2009 ‘Wolverine: Origin’ mini-series, 35 years after his creation. I have to confess to steering away from this, even when I heard of it. I favoured Claremont’s approach and that Wolverine was more interesting when you didn’t know so much about him. It was always known that he was a lot older than he appeared. Referring to ‘Weapon X’ as being ‘Weapon 10’ is something that must have came long after Barry Windsor-Smith’s ‘Marvel Comics Presents’ story.

Although Flores warns she’s going to go through the various ways to torture people before going into it, I do have to wonder if detailing everything is necessary, more so as there are people out there who might copy it.

I can’t help but feel that Flores brings some misconceptions into her book, confused more than a little by combining the comicbook version with the film version.

Likewise, when it comes to Wolverine’s retrometabolism/healing factor. The reason he can drink so much beer is that he doesn’t stay drunk for long as his metabolism neutralises alcohol very quickly. The same applies to his cigar smoking habit which he explained to Kitty (Shadowcat) Pryde when she once tried a whiff in ‘Unvanny X-Men’. Considering his tissue is always regenerating, his senses are always at their peak whether he would want them to be or not.

As such, Wolverine is always alert. This might be seen as giving him a different mental problem to cope with but as he’s always been that way then he’s just as likely to adjust to it. I’m less sure about Flores saying Wolverine’s metabolism removes troublesome memories. We might not all have a deadly past as Wolverine but, equally, we don’t have such a long life and remember every detail all the time.

Other X-Men are referenced. Flores makes the common mistake that Cyclops eye beams are lasers when they are in fact a force beam. She also sees Iceman’s name as two words which she should have spotted, more so as she spells his name correctly in the ‘X-Men’ chapter. Equally, I’m not sure if I would call what Mastermind did to Jean Grey in ‘The Dark Phoenix Saga’ hypnosis as that’s the province of the likes of Mesmero. Mastermind is an illusionist and with some assistance of a device created by Emma Frost, the White Queen, altered Grey’s perception of reality into believing his illusions for a time. More like convincing her she was going through periodic time jumps.

I was curious to look at the book she called ‘The Diagnostic And Statistical Manual Of Psychiatric Disorders’ but only came up with ‘The Diagnostic And Statistical Manual Of Mental Disorders’ which looks like the right name. I know this looks like I’m getting picky but it is always a little worrying when little things are wrong and they start to mount up.

I do wonder where Flores got some of her information. She places Velocidad 36 years too early in the ‘New X-Men’ and totally ignores Banshee who is Irish and the Japanese Sunfire. Both Thunderbirds are Native Americans, not Hindu. Since the original X-Men, who were all American, the shift to having them come from all nations was done to show mutants weren’t limited to one country and also for sales around the world so each had someone they could support.

She also misses out on the fact that Kitty Pryde is the first acknowledged Jewish X-Man and Gambit being the first Cajun. This also extended to all the other X-teams as well. Clairvoyance isn’t the power to dig deep into someone’s memories but a more general ability to see things from the past. None of the above is complex to research.

The fear of Rogue has nothing to do with her criminal past, if that was the case Storm as a former pickpocket thief would have similar problems. Rogue’s touch will absorb another mutant or super-human’s powers. If this is done too long, Rogue will absorb them and some of their memories permanently as happened with Carol Danvers/Ms. Marvel. This is how Rogue acquired her abilities of flight and strength. As such, you would want to keep from even accidentally touching her.

I’m not sure if Wolverine wearing a costume makes him separate from other people as he was already wearing one when he first took on the Hulk. If anything, wearing a costume shows you belong to a particular super-human group and in the Marvel Universe, there are a lot of them.

Although I’m focusing on the errors or corrections needed, there is a lot to be make you think here about Wolverine. Knowing Marvel’s perchance for resurrecting the dead, I can’t see Wolverine staying that way for long.