With ‘Too Many Curses’, A. Lee Martinez proves once again that he is a household name where funny fantasy is concerned. Here he tells the story of Nessy, a female kobold, who tends the castle of the dark wizard Margle the Horrendous. Margle prides himself on never killing his enemies but transforming them into various accursed forms and locking them away in his castle and Nessy just has to keep the castle tidy and all its inhabitants fed, a job that keeps her occupied the whole day long. One day, Margle comes home with a nurgax seed. The nurgax is a strange beast. It springs fully grown into existence, eats the first living creature it sees and bonds with the second one for life and like you would expect from this, Margle accidentally activates the nurgax seed and gets eaten. So Margle is dead or is he? The first thing on the minds of the castle’s inhabitants is: ‘Do our curses get lifted now that Margle is dead?’ Apparently not. Everything stays the same.

So Nessy decides to carry on doing what she has done all her life by keeping her master’s castle in order for his inevitable return from the dead and because she has taken good care of everybody, all of the castle’s inhabitants try to help. Naturally, they all want to get rid of their curses as well. Among those maledicts are Echo, from whom Margle has taken all but her voice; Sir Thedeus, cursed to live as a fruit-bat, and Yazpib the Magnificent, Margle’s good brother and now just a brain in a jar. They are Nessy’s closest friends and companions. While they try to come up with plans to keep the dark wizard from returning from wherever he is, the situation keeps getting worse.

First, The Door At The End Of The Hall disappears and it’s the only artefact in the castle which even Margle feared and now it has left its usual place at the end of the hall as you might have guessed. Next, a Hellhound appears, a creature of the underworld that feeds on intransient souls, both material and immaterial. Which means it will devour most of the castle’s inhabitants if it isn’t stopped in time. Nessy makes a deal with the demon lord who is incarcerated in The Purple Room to find a way to deal with the Hellhound. The Sword in the Cabbage, the sole weapon able to kill the Hellhound, can only be drawn (right, out of its cabbage) by a hero of courage and honour. As it happens, Sir Thedeus is such a hero and the Sword in the Cabbage can give him back his human form for a short while so that he can actually wield the sword. But before a plan can be hedged to lead the Hellhound to Sir Thedeus, the entrance bells toll.

Tiama the Scarred, premier wizardess diabolic of the Forbidden Continent, has arrived, invited by Margle. To make things even worse, she doesn’t take no for an answer and insists on being let into the castle. One more problem to deal with. It takes all of Nessy’s skills and the help of all her friends to handle these adverse circumstances and reach a satisfying conclusion. In the end, even the monster under Nessy’s cot has to play a decisive role.

‘Too Many Curses’ displays a variety of humour, ranging from slapstick to intelligent puns. But it does not only send the characters into one funny situation after the other, it also provides a plausible plot and nice world-building, even if we don’t get to know much about the world outside of Margle’s castle. Martinez tells a tale of friendship under difficult circumstances full of wit. The protagonist Nessy is a more or less detailed everyperson character whom the reader can easily identify with. The other characters are merely elaborate enough to provide material for the various hilarious situations which ensue throughout the novel, but are fun to read nevertheless. Fans of humour and fantasy should give this novel a try. Sometimes I giggled softly, sometimes I laughed out loud, but always I felt entertained. I will definitely look out for other novels by A. Lee Martinez. 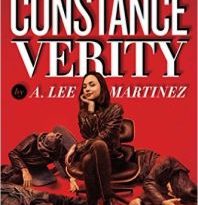 The Last Adventure Of Constance Verity by A. Lee Martinez (book review).

The Last Adventure Of Constance Verity by A. Lee Martinez (book review).