I happened across the International Association of Media Tie-In Writers through an advert on Facebook, no doubt sent my way by its clever algorithms, went to the website and found this book. It was cheap enough and I was curious as the craft interests me. Yes, craft. One does not speak of ‘art’ in this field, darlings. 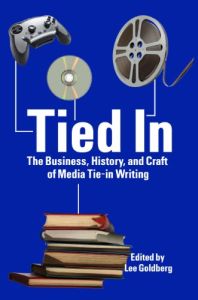 Years ago, I reviewed and enjoyed adaptations of the ‘Star Trek’ animated adventures by Alan Dean Foster and have liked other ‘Star Trek’ and ‘Star Wars’ books. I have nothing against franchise fiction as long as it entertains but there are poets starving in garrets who sneer at the hacks producing such work.

Unfair. We all have to earn a crust and the hard work of writing new stories for a popular film or television series is not a dishonourable way to do it. The book contains several articles which range from personal reminiscences about specific projects to surveys of the history of tie-ins from pulp, through the 60s and 70s and up to modern video game franchises.

‘The Business And Craft Of Writing Novelizations And Tie-Ins’ is a group discussion by several leading tie-in authors that gives their answers to the big questions: ‘Breaking In’, ‘The Deal’, ‘Writing The Novelization’, ‘Writing The Tie-In’, ‘Deadlines’ and ‘The Characters’. Franchise fiction is a difficult business to get into because it’s often by invitation only and you must have a good track record as a writer already. Good news for Brits in that is a little easier over here. Most of the Americans seem to have already had contacts with studios because they have either worked in television or film or knew an agent who knew someone. Virgin Books, the BBC and Games Workshop are more open. Studios usually licence the product to a big publisher who then finds writers. If there are any royalties, tie-in authors get 1-3% of the cover price but that’s not bad if the book shifts a lot of copies. I used to think it was all flat fees but not so.

Writing the novelisation seems to be the most challenging aspect of the business and sometimes the most frustrating. Generally, the author works from a screenplay for a film that hasn’t been made yet or is in production. The screenplay can alter during production so you might follow it carefully and end up with a book slightly different from the film. One writer regards the dialogue in the screenplay as sacred text and another feels free to change it. Point of view can be a headache as movies are generally omniscient and fast cuts between scenes don’t work well in text. All in all, it’s a difficult job and probably not very satisfying artistically. But so what? As old favourite corporate character Daffy Duck once said, ‘It’s not the principle of the thing; it’s the money.’

Tie-ins are more fun. Here you invent your own story and write it like an original book albeit using the corporate characters. There’s more leeway to do your own thing while maintaining fidelity to the originals and not killing anyone important. A book can get below the surface of things and explore backstory, motivation, private thoughts and so forth. All the things that make a novel richer than a film. It can also explore minor characters in more depth, a favourite technique with many of the ‘Star Trek’ books I’ve read.

When the group is discussing sales there are a few facts about the waste in the paperback trade that may be news to some and should appal most. Paperbacks are sent out on a sale or return basis and 40-60% are returned and pulped. There are aircraft hangars full of printed books, covers removed, that no one will ever read. This process of sending them out and getting them back all costs money which is reflected in the cover price. One benefit of eBooks and print-on-demand is that this is reduced, though when you think of the comparative production and distribution costs an eBook really should be much cheaper.

The how-to-do-it discussions may be useful for any writers wanting to get into the trade and might also be enlightening for authors of fan fiction. After all, fan fiction is basically an unauthorised tie-in story. Indeed, some talented fan fiction authors even make it to professional status as tie-in authors.

Most of the other articles are about the history of tie-ins rather than the techniques. ‘Read Long And Prosper: The Star Trek Novels’ by Jeff Ayers is the story of how he compiled ‘Voyages Of Imagination: The Star Trek Fiction Companion’. At the time there were more than five hundred books based on the series and the earliest was by James Blish. Some research was needed. Bantam Books was the first company to get the license back in 1967 and they were edited by Hugo Award winner and famous golden age writer Frederick Pohl but he was no help. He hated ‘Star Trek’ and could recall no details about any of the books. William Shatner has ‘written’ a few tie-ins and wasn’t easy to contact, his ‘people’ blocking the way as is their job, I guess. Ayers managed it eventually. Interesting article and the book might be worth a look but nowadays most of that information is free on-line.

Many of the pieces make it clear that writing tie-ins and novelisations can be a bit of a grind. ‘How To Become A Tie-In Writer’ by Brandie Tarvin is about networking, making contacts and having a shower and a clean shirt every day to make a good impression! All this is very business-like so the final article, ‘Writing Psych & The Delightful Lightness Of Tie-Ins’ by William Rabkin, was a nice note to end on. Rabkin opines that pop culture used to be and still should be ephemeral disposable junk and that tie-in books still are because no one takes them seriously. Therefore, he has fun writing them. This Ray Bradbury-style approach made for a refreshing change.

It’s an odd business. For many writers, the whole point of being an ‘artist’ is to have creative freedom, do your own thing, let your mind roam wild and free. As a tie-in or novelisation author, you are a servant of corporate interests with multiple editors, producers and lawyers having a say in the finished work or even the right to veto it completely.

On the other hand, art and craft are not so totally separate as some snobs imagine. John Lennon said that when the time came for another Beatles album Paul would ring up and say he’d written ten songs and John would ask for a couple of weeks to knock a few off, ‘like a job.’ Writing is a job. Tie-ins allow an author to have some fun with characters he likes, get pretty good sales and put his name before the public. Novelisations of films, especially at the screenplay stage, are less artistically satisfying but everyone has bills to pay, even writers. ‘Tied In: The Business, History And Craft Of Media Tie-In Writing’ is an enlightening read for any reader interested in the trade and a useful tool for any writer keen to get involved in it.