In ‘This Virtual Night’ by C.S. Friedman, an investigation into an explosion on Harmony Space Station reveals the two culprits were playing ‘Dragonslayer’, a virtual game that manipulated their perceptions and tricked them into the attack. The designer of the game, Micah Bello, suddenly finds himself a scapegoat to corporate accountability, despite the fact he built safeguards into the game that should have prevented any outside tampering. 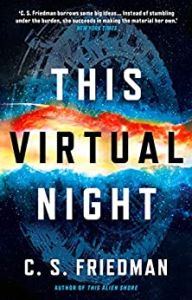 Believing he will be convicted without a fair trial, Micah flees the Tridac Megacorp Station hoping to make it into Common Law space, but soon finds himself marooned on the seemingly derelict Shenshido Station. Meanwhile, the powerful Ainniq Guild recruit the Outrider Ru Gaya to investigate a signal they intercepted between the two perpetrators of the Harmony attack and Shenshido Station. Arriving at the station, her path and Micah’s inevitably cross.

There is no shortage of ideas in this novel which is actually where it gets a little confusing. There are ‘nodes’ based around interstellar jump points that lead to a dimension where monsters may attack the unlucky space-farer. Each node, Harmony Node among them, is a society of its own with space stations that abide by common law and corporate stations that follow their own rules. There are harvesters that bring back raw materials to the node every few decades and spark celebrations and parties. There are outernets and innernets, there are space pirates with their own space stations and pirate soothsayers guiding their progress.

There are mental and physical variants caused by interstellar travel mutation, corporate and Guild bosses who are ruthless, ambitious and perhaps a little stupid and a lot of side characters who don’t last very long. It’s a lot to take in for a rather frugal page count, the detail spread very thinly indeed.

I’m not saying this should be a doorstop novel and, once you get past the setting, there is a story that has something very real to say about virtual addiction. This is a society of people that can and do live in their own heads. It is a world of information over experience where, because of their connection to that world via internal cerebral machinery, their every perception of reality can be shaped and altered. Even when the population aren’t playing a game, they aren’t in the real world either. While the novel snowballs an avalanche of world-building, it is tiny in comparison to the deluge of information that assaults the people of Harmony Node every minute of their lives.

But if there are lots of ideas, these run side by side with the action that forms the greater part of the story. The characters of Micah and Ru encounter ever growing challenges and danger. Most of the time, people want to kill them, even as they are slowly ferreting out information as to what caused the Harmony Node attack in the first place. Between well described battles, running, escaping and being knocked unconscious, the two finally realise what’s going on and who the enemy really is. The novel shifts gears rather abruptly after that as to how that enemy is ultimately defeated and cue the title, it is not in a physical way.

The greatest strength of the novel or strengths are Micah Bello and Ru Gaya themselves. While other characters briefly guest and scowl, it is these two who form the foundation of the novel. With them It’s a question of contrasts. Ru Gaya initially has the most development, because her troubled past and mental variation means she is something of an outsider. Her status as an Outrider means she spends decades between stars, returning to an ever changing society she refuses to become attached to. While Micah makes a habit of connecting to the net and becoming part of it, Ru does not. This is a vital plot point because it saves her and allows her to save Micah. Her strength is her independence and loneliness.

Micah, on the other hand, provides little sense of his own history or ‘otherness’ to Terrans. Instead, he is happy creating a constant stream of gaming fantasy worlds where reality is his for the making. The events of the novel change him over time, giving him confidence and strength, just as Ru’s real world outlook educates him into facing reality. He becomes braver, fighting rather than running and winning the day almost by himself. Ru and Micah are opposites and, if she changes very little, he changes a lot. They complement each other, their own viewpoints and experiences exploring digital addiction from both sides of the fence.

Without giving too much away, the ending of the novel leaves it open for more adventures with Micah and Ru, now together and embarking on a relationship of their own. It will be interesting to see if a sequel is forthcoming and where the two go from here.