Proof copies of books are produced for a number of reasons. An author always likes to know what the finished product will look like and to be able to spot any glaring errors before the book hits the shops, like the title spelt wrongly on the cover. They often get sent to reviewers. Although there are still many publishers who do not want reviews to appear before the publication date (are they worried the book will be panned?) others would like the opportunity to get quotes to put out with the publicity or even for the cover of the finished product. The problem with reviewing a proof copy is that there may be differences with the finished product. There is a danger of making adverse comments about things that have already been addressed, have been put right or just hadn’t been available when the proofs were compiled. Often the cover artwork is missing. ‘The Woman Who Married A Cloud’ doesn’t suffer from that particular problem. Credited to Ryder Carroll, it looks good. With a collection of stories, I like to know when and where they were originally published. It gives a sense of the development of the author and whether there are any themes that occupy them at particular times. The blurb at the back of this copy gives some information about the contents of ‘The Woman Who Married A Cloud’. There are thirty-seven stories here, some of which have won awards, written over a period of thirty years. Some, we are told, have been published here for the first time. Which these are and how many is speculation.

Jonathan Carroll is a very fine novelist, able to capture the bizarre or surreal in a situation in such a way that the fantastic become believable. He has a skewed way of looking at the world which is also reflected in these stories. Many of them have a bizarre title, such as ‘Asleep In Wolf’s Clothing, ‘A Bear In The Mouth’ or ‘East Of Furious’. Just the title conjures a sense of the absurd and often it is a line within the story itself allowing the reader to wonder what came first, the title or the phrase in text.

The best of the stories in this volume are very good indeed and it is interesting that these tend to be the longer ones. The title story, ‘The Woman Who Married A Cloud’, is actually the final story in the book. It takes computer dating into a dimension. Two sisters, Ramona (Ray) and Lia have been matched with their ideal men, who are actually aliens whose natural form is cloud-like. Ray has married her partner and is deliriously happy but Lia is having problems with her relationship. As in many of his stories, Carroll is using the bizarreness of the situation to explore the psychology of his characters. Both women here are given insights into their own psyche. The difference between them is that Ray is able to adjust what she discovers while Lia doesn’t.

Many of us have imaginary friends when we are children. Lenna Rhodes created Mr. Fiddlehead in the story of that name. While most of us grow out of the need for these friends, Lenna’s has aged at the same rate as she has and returns when she is going through an unhappy period in her life. The narrator is Juliet, Lenna’s sister-in-law (they married brothers). She falls in love with Mr. Fiddlehead but as Lenna’s situation improves, her imaginary friend will not be needed, leaving Juliet bereft. Juliet doesn’t come well out of this piece, showing herself to be selfish and self-centred. It is a tantalising story leaving the reader with an uncomfortable feeling of satisfaction.

‘Friend’s Best Man’ is a poignant story of trust and friendship. Friend is a Jack Russell terrier. His owner, Egan, lost a leg saving the dog from an oncoming train. While in hospital he meets Jasenka, a child dying of a rare condition. They become friends and Jasenka says that Friend talks to her. She passes on messages to Egan from the dog, which turn out to have truth in them. At the end, Egan has to decide whether to trust Jasenka’s last message or dismiss it as a child’s vivid imagination. Running through the story is a theme of being able to believe that even in the worst situations there is some good. Often, you get what you need rather than what you want.

‘Uh-Oh City’ has an intriguing premise. Imagine that God’s soul consists of thirty-six different pieces. Each piece is an ordinary-seeming person who lives and age like everyone else. Before they die, they find someone to pass their segment of godhood on to. What if the person you were supposed to pass it on to dies before you can? Does a bit of God die with them or can there be a replacement? When Scott and Roberta Silver hire Beenie Rushford as their new cleaner, they are delighted by her efficiency. Not only does she make everything spotless within a record time but she sorts out the places, such as the basement and the attic that have become dumping grounds. She always asks whether they want to keep something or throw it away. It is when she finds things that he was sure had been got rid of years ago that Scott begins to wonder exactly who Beenie is. Some of the answers are uncomfortable.

Although the longer stores in this volume tend to be the more satisfactory, there are gems among the shorter ones. ‘The Fall Connection’ tells of an ordinary, dull man who, when he discovers he is dying, almost on a whim cashes in everything he has and goes to New York. There, for the short time he has left, he discovers all the things he might have had. ‘The Dead Love You’ tells of a couple who try a scam involving causing accidents. Unfortunately, in this case they choose the wrong victim. There are others as well.

Some of the stories, though having interesting and clever ideas, do not seemed fully formed or are waiting for a longer treatment. It makes you wonder if these are the previously unpublished ones. Carroll has been writing for thirty years and a problem that arises from not knowing the original date of publication, it is difficult to know how original an idea was when Carroll wrote it. Some seem very familiar and tired now but may have been fresh and original then. The quality of the writing in all stories is well up to the standard expected from such and experienced and versatile writer as Jonathan Carroll, it is the execution of the idea that doesn’t quite seem to go all the way. That said, this collection is a volume that all admirers of Carroll’s bizarre way of looking at life will appreciate. 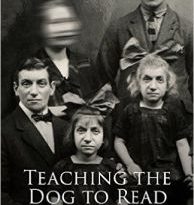 Teaching The Dog To Read by Jonathan Carroll (book review).

One thought on “The Woman Who Married A Cloud by Jonathan Carroll (book review),”

Teaching The Dog To Read by Jonathan Carroll (book review).