Originally, a small store in the basement of a Texan cinema, the legendary Alamo Drafthouse, ‘Mondo’ is now a worldwide boutique store in which artists from across the world give their own unique spin on pop culture. Unsurprisingly, the comicbook world is a popular source of inspiration for Mondo’s selection of memorabilia with screen prints and the like which regularly sell out. ‘The Marvel Art Of Mondo Poster Book’ rather does what it says on the tin by collecting some of the best examples from Mondo’s archives. 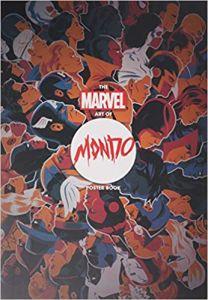 The posters on offer here all use the Marvel comicbook universe as a jumping off point so this collection at least is not for those who want some new posters from the Marvel Cinematic Universe which, let’s face it, many people do as we’re all sick to death of teal and orange by now. Instead, we have a wonderfully diverse collection of works, some of which hark back to the past and others which concentrate more on the modern day.

Indeed, one of the stand-out works is Johnny Dombrowki’s ‘Silver Age Of Marvel Comics’ in which he mocks up a cover of ‘Marvel Tales’ with the typical gallery of Marvel super-heroes on the cover. It’s a classy and stylish representation of a pure comicbook aesthetic, down to the slightly yellowed background giving the impression of faded newsprint. Killian Eng channels the spirit of Jack Kirby in ‘Silver Surfer’ whilst DKNG’s ‘Spider Verse’ is visual representation on all the various members of the ‘Spider’ family since 1982. They all exemplify the bright and colourful visuals that made Marvel such a staple of modern times whilst others, such as Rich Kelley’s ‘Golden Age Of Marvel Comics’ and Mike Sutfin’s ‘Spider-Man Vs. Doc Ock’ feature example of kinetic action sequences which we also associate with pour favourite tales from the Marvel Universe

There are some subtle affairs on offer as well. Craig Drake’s ‘Cloak And Dagger’ is a moody and angular portrait of the teenage super-heroes that is swathed in black, white and grey, while Thanos, from ‘We Buy Your Kids’, takes an almost Shakespearean air while he sits in a thoughtful pose, albeit on a skull, natch.

Other particularly striking effort is Florian Bertmer’s ‘Nightcrawler’ in which the sometime X-Men is given a context which looks like a German circus poster from the 1920s. Ghost Rider, from Methane Studios, is given a similarly striking interpretation with a poster that is redolent of the 1960s, funfair Haunted Houses and small town Americana.

Each of these posters can be removed and framed, making the collection very good value for money, especially when you consider how much individual Mondo posters can often go for, though the collector may also try and keep these as a coffee table book. Whatever floats your collector’s boat, this is a stylish and classy collection that fans of Marvel or those who just enjoy the general aesthetics of comic books should find something to marvel at.