I do wonder if author Marcus Chown’s book ‘The Magicians’ is a good title, although the sub-title, ‘Great Minds And The Central Miracle Of Science’ should point out that it’s not about magic. Over the ten chapters, Chown goes over the discoveries various scientists have made about the reality we live in, mostly in quantum mechanics. You’re not going to get much in the way of the mathematics but his approach does point out how things happened.

This is the first time I’ve seen an easy to understand viable explanation of how a planet’s orbit indicates that there was another planet beyond it. Simply put, Uranus wasn’t in its predicted orbit and the difference was what indicated where Neptune was drawn to it. All done by mathematical difference and where to look, although I do have to wonder how often that closeness happened before it was discovered. Of course, once it gave information where to look, it made it easy for Neptune to be eventually found amongst the stars. 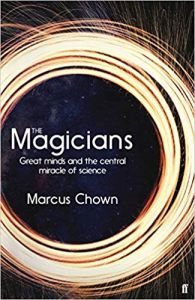 A lot of the discussion points are often scientists coming up with theories but the practical happening much later as with Faraday and Maxwell. However, the ear is shifted into quantum mechanics, especially how Paul Dirac made his breakthroughs and, here, Chown thinks of him as a magician for making the connections. As an imaginative geek who can figure out patterns, I see this as quite a normal thing to do. The real problem is convincing others that you’re right.

The information of which enabled the Manhattan Project and Wolfgang Pauli’s Exclusion Principle sorting out the spins of sub-atomic particles and why they avoid collisions. Without that, we wouldn’t have been able to detect neutrinos by Frederick Reines’ team. The connections throughout this book are built on previous discoveries but that’s normal for science. Where quantum mechanics/physics is concerned, it just becomes more exciting because, for many of us, it’s all nearly within all our lifetimes. All of this becomes more relevant as we move closer to creating quantum computers.

Seeing the discovery of how the universe was formed here is also the work of many people, each having a claim to part of the puzzle from a constant low level background radiation across the cosmos to why the galaxies are moving away from each other. Oddly, the only thing not covered is why we are going to collide with the Andromeda Galaxy many millennia down the line. Saying that, I doubt if it’ll be a sun to sun collision, more a case of passing through each other and gravity keeping it together afterwards. Even so, this should have been at least covered as a footnote if only to explain how it can happen in an expanding universe.

We owe our knowledge of black holes to Karl Schwarzschild who worked it all over from Einstein’s relativity formulas while hospitalised. It wasn’t actually his intent but just expanded (sic) on what would happen if mass was compressed. The theory was there long before the discovery of black holes, the first by Louise Webster and Paul Murdin in 1971, and even they had problems convincing their boss they were right and got it into print. When you consider that astronomy depends on noting what you can see down a telescope but you can’t see a black hole even more remarkable.

A lot of scientific thought comes from either spotting something unusual and working out how it happened. Speculative or pure scientific thought is often an extension of this and looking at extremes which is how black holes were thought of. Absolute proof is finding the match for real which verifies the theory.

This book is a graceful read. Chown does have a good knack for explaining science and you might find this book useful for all ages as you not only get a bit of history of the scientists but their theories as well. Read and learn.