‘The Larion Senators’ is the concluding instalment in ‘The Eldarn Sequence’ by Robert Scott and Jay Gordon. If you’ve enjoyed following the exploits of Steven and his companions so far then I don’t think you’ll be disappointed with this book. If you’ve not read the first two books, ‘The Hickory Staff’ and ‘Lessek’s Key’, I’d suggest you put down book three and head back to the beginning; this would be nearly impossible to follow without having read books one and two. Nerak has been banished to the Fold, but when the evil that once possessed him takes over the body of Mark Jenkins, the resistance fighters and Steven Taylor realise they have made a grave mistake. All of their plans, strengths and weaknesses have been revealed to the enemy and they must hurry to warn those now placed in danger. As Steven’s party draws closer to a confrontation with the entire Malakasian army, they must figure out the messages left in Lessek’s spell book before the spell table is activated. The fate of Eldarn hangs in the balance as good and evil prepare for one last battle.

The main reason for that is the abundance of characters and the intertwining plot threads that follow several groups of them at any one time. It’s all very tidily done and I really enjoyed the ways in which seemingly random events suddenly became part of a much bigger picture. However, it does require you to have a good memory and I know a few people who might be put off by the number of characters you’re required to keep in your head.

Plot-wise, there isn’t a lot to this book. The good guys are trying to stop the bad guys and, for most of the book, they’re really just trying to catch up with them. That’s not to say that it is a dull book, far from it. There are lots of little bits of intrigue, action and even romance, with a dash of philosophy and mathematics thrown in to keep the old cogs turning. I don’t think the plot will give you many surprises but I enjoyed going on the journey with the characters and spending some more time getting to know them. ‘The Larion Senators’ is book three in the series, so much of the plot has already been delivered and in this episode we’re really just waiting to see how everything comes together and concludes.

I’ve often been annoyed at poor endings to good series but I’m happy to report that, other than a few moments that were maybe a little too contrived (I’m quite happy to forgive these), Scott and Gordon have managed to tie things up in quite a satisfying way. The book and series ended, but left plenty to the imagination and plenty of scope for further works set in this world.

All in all this was an enjoyable conclusion to an engaging and entertaining fantasy trilogy that I’d be happy to recommend to any of my reading friends. 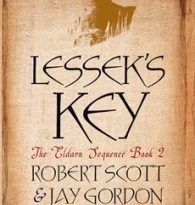