In many respects, Basil Mahon’s book ‘The Forgotten Genius Of Oliver Heaviside’ covers practically everyone related to the invention and use of electricity outside of the USA. Mahon mentions the likes of Wheatstone, whom Heaviside was related to William Thomson (not stated as Lord Kelvin except with his photo) to James Maxwell and Heinrich Hertz before spending some time looking at their careers. Heaviside, being mostly deaf from a childhood illness, was involved in the nascent telegraph service and working on wire resistance and better signal transmission in the days of Morse Code. Mostly working from home, his theories were such that others paid heed to them even if he wrote obtusely, that is not in a straight forward way. An 18th century geek before we had such a definition.

Something that Heaviside brought to electricity is differential calculus. For those who don’t know, this becomes important when it is applied to a precise moment in time. When you consider that electricity moves at the speed of light and you need to define the moment of resistance then you’ll wonder why it didn’t come up earlier.

The best way to describe Heaviside is reclusive, cranky and eccentric. He was also proud and brilliant enough in his field that others paid attention to what he wrote. I can understand Mahon’s problem of finding out enough information about Heaviside because his home life or how he lives it rarely comes up in text. I would have liked to have seen some of the original papers he wrote that appeared in the scientific magazines of his day if only to understand the problems his articles caused.

Much of the formulas and his science, especially his legacy, are in the footnotes at the back of the book. It would have made more sense to have incorporated much of this into the main contents of the book. If readers couldn’t understand it, they can easily skip it but placing in notes brings it to secondary importance. I think even Heaviside would agree his maths is more important than his life.

Even so, you might not have heard of Heavison, much of his maths is used in physics and Mahon has done a lot of good by recognising all the work he has done. It’s probably a bigger puzzle why his surname was never adopted into the nomenclature of terminology. 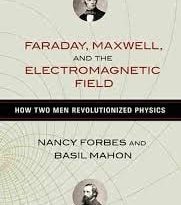 2 thoughts on “The Forgotten Genius Of Oliver Heaviside by Basil Mahon (book review).”