The toothless spy thriller The Cold Light of Day has a snappy movie title which sounds like it belongs attached to a James Bond supercharged production. It is too bad that the movie’s moniker is the only thing legitimately hip and happening about this flat and spineless suspense piece. This rudimentary race-around-the-clock spy drama is something that audiences have seen many times before. Conclusive in its follow-the-dots feeble fury, The Cold Light of Day feels about as intriguing as wire-tapping a hotel room occupied by a shady state official accepting a bribe.

If there is anything substantial to this hard-boiled hogwash then it will be in the form of the movie’s emerging star Henry Cavill (“Immortals”) who is obviously padding his film resume with dismissive dramas prior to his preparation as the newest Superman in the 2013 release of The Man of Steel. Although the buff British actor has the charisma and intensity to take on the iconic American caped crime-fighter Cavill will probably be a footnote in the aftermath of this kinetic, derivative whodunit.

Filmmaker Mabrouk El Mechri numbing ninety-three minute narrative is exceedingly conventional and looks as if it was made out of the leftover scraps of the Bourne film series. Relentlessly clichéd, stagy, choppy and uneventful, The Cold Light of Day wants to wallow in the loose skin of a taut exotic espionage tale with Cavill’s harried hero flexing his muscles among the contrived chaos. At the end of the day, Cold Light amounts to the familiar basic blueprint of other faceless and frenetic fables smothering in its inert and bombastic importance.

Noticeably, the ubiquitous Bruce Willis (recently seen in The Expendables 2) and resourceful veteran vixen Sigourney Weaver (“Avatar”) make appearances in The Cold Light of Day in what is reduced to an already convoluted and eye-rolling concoction of paper-thin pulp fiction (how’s that for a Willis-oriented film reference folks?). The makeshift script by Scott Wiper and John Petro feels cartoonish and spotty and never justifies its aimless plot holes or obvious stabs at the transparent tension at hand. Suffice to say that there was more viable suspense and depth in Willis’s nostalgic late 80’s television romantic actioner Moonlighting than the manufactured edginess that persists in Cold Light.

Cavill, the former star of television’s The Tudors, plays a youthful and spry American businessman named Will Shaw who happens to be vacationing in the scenic surroundings of Madrid with his family. The intent for the Shaws was to enjoy the aquatic adventures where they were to join up with Will’s yacht-sailing father Martin (Willis). Naturally there is the obligatory strained relationship that exists between the father-son combo of Will and Martin.

As Will decides to leave his brood behind for some quality time alone as he contemplates his financial woes and daddy-related issues he returns to find that his family has been kidnapped. The captives are holding Will’s absconded family members in retaliation for his old man’s Martin’s misguided actions as an intelligence operative that crossed the line with his resentful high-power associates. Thus Wall Street trader Will Shaw must ditch his financial philosophies for the self-discoveries of fists and firepower as he works diligently to rescue his loved ones and unravel the damage that Daddy Dearest Martin is responsible for before the turmoil escalates any further.

As Will parades around the picturesque region in frantic motion the Madrid-set thriller is bombarded by wooden acting, juvenile dialogue and mechanically stiff editing. The arbitrary featherweight father/son bickering is so laughable that it would not authenticate the comical clashing between junk dealers Fred and Lamont on an old rerun of Sanford & Son. The film goes through the recycled motions of forcing the predictable showcasing of foot and car chases, rooftop jumping, gun-toting capabilities, swimming and rafting and other action-oriented techniques that require Cavill’s character to demonstrate his custom-made outrage (not to mention his visualized excuse to display his superhero physique).

As if the storyline was not cockeyed enough in grasping the nonsensical proceedings Will is confronting the menacing and corruptible spies that snatched his relatives with the aid of his curvaceous and desirable Spaniard half-sister Lucia (Veronica Echegui). Serving as an added burden to Will’s troubles is a brassy governmental authority figurehead Jean Carrack (Weaver) thrown into the confusion with her blistering involvement and occasional  criticism of Will’s quest to even the score. The sole purpose, as we are witnessing in vagueness and incoherency, is for Will to retrieve a mysterious briefcase during his on-the-lam exploits.

The ridiculousness behind The Cold Light of Day’s excitable execution of Cavill’s jittery Everyman tangling with the sinister forces of distrustful Big Brother-esque bureaucrats is a waste. Cold Light is nothing more than a throwaway thriller that should have been relegated to the accommodation of late night cable TV entertainment.

Pointless, preposterous and blandly conceived, El Mechri’s sluggish and showy international thrill-ride is a forgettable espionage actioner that squanders the plastic performances of Superman-to-be Cavill and celebrated supporting A-listers such as Willis and Weaver mailing in their trivial roles in this twitching, target-practicing tripe. Only Echegui comes off slightly respectable as a diva in distress willing to soak up the Madrid-based mayhem with an enthusiastic off-the-cuff wink.

Hopefully Cavill’s 2013 upcoming turn in the aforementioned Man of Steel will not be compromised by the existence of this clumsy Kryptonian crime clunker. 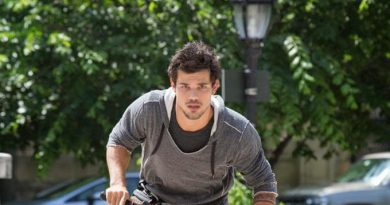