In the near future, a strange plague has swept the Earth. People are losing their shadows and, with them, their memories. Without memories, humans are turning into something new and uncontrollable, shaping the world around them into a dreamscape of the strange and the terrible.

Yet some shadowed humans remain, fighting for survival, fighting to save those they love from the oblivion the plague brings. Ory is one such survivor, searching for his wife Max in a land he no longer recognises. As Ory searches, Max is moving towards the rumour of a cure and The One Who Gathers, a rumour that may be the last hope for all humanity. 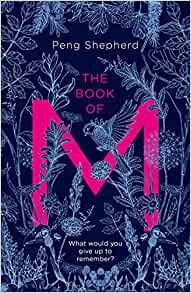 I love the world Peng Shepherd has created in ‘The Book Of M’. It seamlessly blends the familiar and the weird, so that as we travel the world things are sometimes exactly as we expect them to be and at other times so bizarre they’re almost incomprehensible. The idea is that as people forget what things are really like, they reshape the world around them into things they imagine to fill in the gaps in their memory. Whether this is changing the colour of a pen or reshaping an entire city, creating strange new animals or violent weather systems, the changes appear and disappear with no warning. They’re always well-described and it was fun exploring with Ory and Max to see how both shadowed and shadowless humans experience this new world.

However, while the world was a delight to explore, I struggled with this book because I didn’t fully manage to connect with the characters. The story is told through the eyes of four narrators, switching to a new one each chapter, which I think made it a bit disjointed. The constantly switching viewpoint meant that every time I started to get involved with a character, they disappeared again for a few chapters and I felt like I had to start again next time I encountered them.

For me, it was one too many and I’d have dropped Naz as a viewpoint because I don’t really think it added much to the plot and the extra insights we gained from her sections could have been brought into the others.

I also found the timeline quite difficult to follow. The story jumped from current events to past reminiscences and within both the passage of time was quite erratic. It sometimes followed day to day and at other points jumped forward a number of months with very little indication that so much time had passed. I had to reread several sections to figure out where they fitted in with other events.

Ultimately, I didn’t enjoy this book as much as I wanted to. The premise of the story and the world-building were both fantastic, but the disjointed narration and lack of engagement with the characters stopped me from becoming fully immersed in it. I’ll definitely keep an eye out for further books from Peng Shepherd, but I won’t be rushing to read them as soon as they’re released.