I’ve held back watching this nearly 3 hour long film until now when I have a comfortable time watching it. Definitely a lot darker than the Christian Bale version. Darker by lack of light not tone.

Despite looking like some sort of Batman (actor Robert Pattinson), he prefers to be called Vengeance. Oddly, his rhetoric sounds more like Rorschach and fight moves more like a certain Nite-Owl II. One would have to wonder how he mellowed over the years as this is his second year of vigilantism in Gotham City and, apart from Detective Lieutenant Jim Gordon (actor Jeffrey Wright), the police don’t like him, as illustrated when he is brought in on a murder case to look at the evidence. 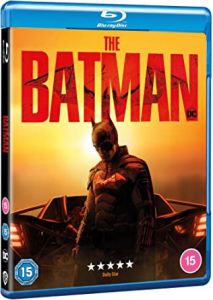 Some aspects remind me a lot of the ‘Gotham’ TV series, just with more realignment. I do think its pretty obvious who this Batman is pursuing. Considering the way that he enlists Selena Kyle (actress Zoë Kravitz), you do have to wonder why he later chose a boy sidekick and dressed him up in a gaudy costume so he would stand out in the dark.

There are some odd gaps in the logic. We never see how this Batman contacts Gordon so they rendezvous to talk. Gordon, in turn, uses the bat-signal. Equally, the cloak barely moves for much of the time and you have to wonder just what it is doing there until the skydive.

It isn’t until we’re nearly an hour into the film that we see daylight, albeit a rainy day, and Bruce Wayne off to a civic event. At least we’re spared an origin story this time, although details are given along the way that his father was a mayor candidate and still rich. Considering Bruce Wayne is supposed to be a contrast to his Batman guise, moody silences don’t really help that much.

Rather weird that after being knocked unconscious by a bomb blast and taken to police headquarters do they consider taking his mask off, let alone disarming him when you would think that would be done earlier. He finally uses his cloak as a gliding device but still not perfected it yet.

The pace of this film is odd. It’s almost like the production heard the word ‘gothic’ and thinks it needed an arthouse movie, with long drawn out pause music and deep inner meaning pauses. That’s not to say there are the odd action sequences but the film is so drawn out, it looks like the action was designed to wake the audience up.

What is more puzzling about this film is the discovery of this deep corruption in Gotham City and Jim Gordon has been oblivious to it all this time. What kind of cop is he? Surely he must have suspected something, let alone which cops to be wary of.

On to the Extras disk.

‘Looking For Vengeance’ runs at 5 minutes discusses aspects of the film with cast crew and producer/director/writer Matt Reeves’ and some scenes that didn’t make it and some of the fighting style. ‘The Batman: Genesis’ at 6 minutes has similar contributions showing the film build-up. ‘Vengeance Meets Justice’ at 10 minutes explored the Batman and Riddler’s connections. ‘Becoming Catwoman’ at 8½ minutes has actress Zoë Kravitz going over own audition and her own training. ‘The Batmobile’, around 11 minutes, should give you a clue what its about. ‘Anatomy Of The Car Chase’, another at around 11 minutes’; analyses that aspect from the film using driver pods on the car roofs so the actors only have to act. ‘Anatomy Of The Wing Suit Jump’ 6½ minutes long shows how its done.

‘Vengeance In The Making’ is 53 minutes long, so give yourself plenty of time to watch it. The behind-the-scenes aspect shows how much was back-projection. A lot of explanations come up here as to some of the decisions carried out. In production, they had to shut down for the covid crisis, resuming in September. Oh, did I say a lot of the exteriors was filmed in the UK, Liverpool to be precise. 18 months production instead of a year.

‘A Transformation Into Penguin’, at just over 7 minutes, shows how Colin Farrell is turned into Oz and how good the effects man Mike Marino was. You can watch 7 minutes of ‘Deleted Scenes’ with and without commentary. Actually, it only looks like two with the first Batman is interviewing someone at Arkham who looks a little like that chap with the big laugh. Another with the disguised Catwoman with Oz.

Interestingly, there is no audio commentary with this nearly 3 hour film so I guess even the producers balked at that length. It gives you the scale of production testing the costumes in 2020

Oddly, when referring back to ‘The Art Of The Batman’ book, there is nothing done about the bat symbol on the Batman’s chest being used as a batarang although shown in the extras. Looks like that was missed in the mix.

Overall, I think I’m at odds with the length of this film. You would really have to be really familiar with the different carnations of the Batman to check out all the comicbook referrals. Yes, the comicbook fans are going to watch but some of it is going to go over the general public’s heads. We’ll have to see how much is carried over to the next film.