Dr. Doyle has returned from Afghanistan with a leg injury tainted with dark power. Practically penniless yet unwilling to leave London, Doyle finds himself sharing a flat with a most peculiar entity. Crow is an angel, though of a most individual type. Not tied to a public building like all others of his kind, Crow claims all of London as his home and works as a consulting detective. 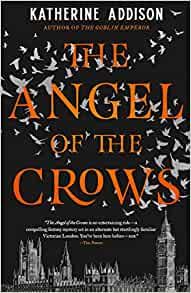 The stories are familiar. There is a hound haunting the Baskerville family. A murder in a locked room with a speckled band. Jack the Ripper haunts the streets of London’s East End. Names have been changed in this version of the adventures of Sherlock Holmes and Dr. Watson because the action does not take place in our world but in a world where the occult and the spiritualistic are everywhere and almost commonplace. Fallen angels fight imperial forces in Afghanistan. Werewolves run hotels. Red lights in a window lure in vampire addicts. Automatons. Hell hounds. Ghosts. Clairvoyants. Angels.

The book began life as a winfic, a sub-genre of fanfiction where you add wings to a character that does not have them. The differences are what kept me reading but the similarities often had me wanting to skim. Sherlock has had so many adaptations and is such a part of popular culture that at times it was dull to revisit the same plot lines. Crow and Doyle are distinct from Sherlock and Watson seeing the characters move further beyond the classic stories would have elevated this book further. Even the addition of the real world unsolved murders of Jack the Ripper and the Thames torso murders doesn’t move the story out of familiar territory since Sherlock Holmes is often pitted against Jack the Ripper in popular culture.

Addison has created a wonderfully deep alternate world that seamlessly integrates a winged Sherlock Holmes into itself while still having the historical feel of the original stories. Every element in the world fits together and, looking back on the novel, I can see how adding wings to a single character led to each decision in building the larger world. While I desperately wanted the characters to move beyond the well-trod path of Holmes and Watson, I also fell in love with the world. I am a big fan of the era and the urban fantastical feel, both of which were beautifully portrayed here.

As much as I loved the world, the sticking point for me is that Crow and Doyle will always be Watson and Holmes in my mind. I wanted to love this novel so much more than I did. There is so much possibility in this world that is obscured by the devotion to the homage to Sir Conan Doyle. I wish Doyle and Crow could have spread their wings (pun intended) and emerge as their own characters without the shadow of Holmes and Watson. I hope that Addison returns to this world in the future and her world further into the parallel rather than being haunted by our own.