In the opening scene of ‘The 27 Run’, a young man wakes up to find himself dangling from cables in the pilot seat of a huge robot. Chatting to him is SID, a designated sidekick robot/AI companion who overwhelms him with information and makes jokes. SID is fun, reminding me of Robin Williams’ voiceover of Aladdin.

The robot tells the man he’s the designated pilot of the Mech they are in, he’s been asleep for a very long time in an ITER chamber and that he had better wake up fast as they are under attack by a large monster. It’s a winged demon with claws and sharp, pointy teeth and scary big but, it turns out, small as the new monsters go. 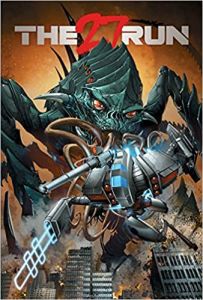 The setting is Earth in the future, after a catastrophe. The source of the monsters is a bit Jules Verne or ‘Doctor Who’, but who cares? The bright, colourful art suits the theme of a giant Mech that looks like a robot fighting even bigger organic monsters. The Mech has torpedo and missile pods in each shoulder, defensive shield torches, aft proximity mines, a high temp cutting blade and an electromagnetic rail cannon. How can it lose?

Monsters versus machine in glorious colour with amazing action scenes! ‘The 27 Run’ is a bold attempt to translate SF movie spectacle into comicbook form and, in so far as that is possible, it works. If that was all, it would soon get boring. Happily, author Justin Zimmerman has created a great character in SID, the robot assistant. His fast patter annoys the pilot, a man confused and disorientated from long sleep, but keeps the reader interested. There are sequences of good storytelling in between the splash pages and a few good plot twists.

The one hundred and twenty page count is misleading as the story only takes ninety. The rest of it is copyright information, creator bios and several pages showing the development of the art from layout sketches to full colour which is interesting enough that I didn’t feel cheated. ‘The 27 Run’ is an action-packed sexless adventure aimed at young people that’s a bit of fun for adults, too. Justin Zimmerman and the team fulfilled their mission to provide unpretentious entertainment. I liked it more than I thought I would, to be honest. Good stuff. 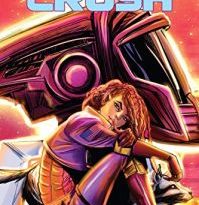